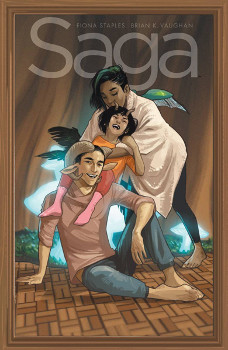 This review is about to get super spoiler-filled, so do not continue to read it if you haven’t read Volume 9.

It’s been amazing to see Alanna and Marko connecting again as lovers and co-parents. Their relationship started the whole journey, and it’s a nice reminder that while we may like the other characters — they and Hazel are at the center.

I do think that many characters have lived through the most ridiculous of deadly situations, see The Will and Prince Robot IV, that seeing permanent death of our main cast is hard. As much as we can argue that the deaths are “realistic,” it’s also a story about horned man with magic and a woman with wings who got married and fly around in a living tree spaceship with their daughter and wacky companions. They just live on the outskirts of war.

One thing Vaughan has not explored — and I’m surprised Alanna and Marko wouldn’t try for this — would be to go beyond the known space. If space is vast, then there has to be somewhere not touched by the war. However, that is perhaps the point, there is not a space.

I’m really sad one of our two gay characters died. I am not sad Prince Robot IV finally died. (Though a friend immediately pointed out that he’s probably not dead as he’s never dead.) And then about Marko.

Hazel’s narrator text seems to indicate that her father is really dead. However, it wouldn’t be the first time her text wasn’t quite right. It’s not that she’s an unreliable narrator, it’s more than sometimes, we don’t see what’s going to happen next. With the creator break, it’s going to be quite a long time before we truly know what’s next.