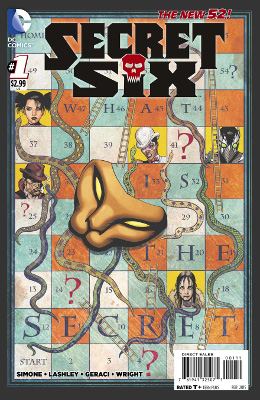 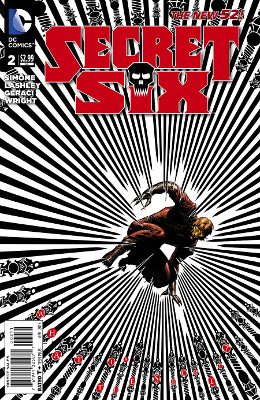 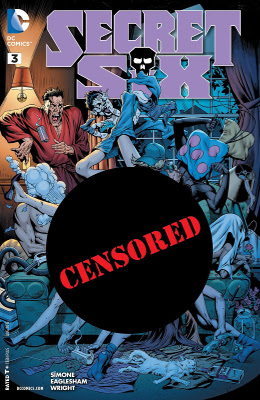 While I don’t believe I reviewed any issues here, I loved Simone’s original and unique Secret Six, and it’s definitely one of the books I missed the most with the 52 reboot. Unfortunately, this debut issue doesn’t live up to the promise of the old books.

The pacing in the opening issue is largely off. While it’s smart for Simone to tell the story from Catman’s point-of-view (especially since he’s the only long-time team member from the old book (Black Alice was only there for a short time) to come to the new book), there’s far too much of Catman reminding us, the readers, that he’s awesome instead of seeing him in action. Even the fight and capture scene, which takes far too many pages of the book, doesn’t really show off what makes him unique. We just know that Catman is pretty much as unhinged as where we last left off.

I was expecting the singer to be Knockout or Liana, but maybe I’ll cross my fingers for the former. I assume Catman’s captors will be back.

This Saw or Cube-like setup of the characters all together seems overdone recently. Maybe there’s just been too many Saw movies. I assume since Big Shot is the only one who’s not a killer or villain that he’ll be the first to be killed.

I’m hoping Porcelain gets more personality and becomes less the person that Catman just talks to. Catman’s “you wouldn’t like me when I’m angry” line about being caged up got old quickly. Again, a telling, not a showing or really a threat.

Wouldn’t it be pretty easy to the characters to figure out which mask fit their personalities the best?

I do feel bad for non-Simone fans who pick up this work. Catman’s not showing why he’s cool, and they’d have no idea who Black Alice, Ventriloquist, or Strix even are. I’m surprised that Catman didn’t recognize Strix as being from the Court of Owls, considering he always seems to know what’s going on in Gotham.

Besides the uneven pacing and bored with horror movies plot, the art was not so great. Lashley’s style is extremely sketchy, and while I’m totally onboard with bringing different styles to the table, it didn’t seem strong enough to lead a book that needs a solid artist to sell well. It came across more like drawings for a supernatural horror comic, except the background didn’t have enough detailing to really work. While it seemed a shame that Lashley had part of the inking duties — which made the art seem even more weird — because time to do backgrounds wouldn’t added a lot. There’s nothing, in my mind, that can sink a first issue out of the gate faster than inconsistent art. It also comes across as DC not putting their full support behind the book.

Still not digging Lashley’s art or this storyline from Simone. However, it is better than the first issue. Not a ton better, but going in a good direction. I’m so freaking glad that they all got themselves out of the locked box under the ocean. That wouldn’t have made for a very good comic book.

Also, I’m never a fan of the mystery jailers. Give me a villain or even a hero that I can rally for or against.

So I’m taking it that the villain which locked all of them up as the same one who locked Catman up for a year. (And what happened to that cat!?) Still, I’m not making the emotional connection very well here. Like I don’t actually care that this happened to Catman.

Or that Black Alice almost died. (Seems like Simone is establishing a Bane/Scandal type father-daughter relationship with Big Shot and Black Alice. If I had to guess…)

I do like that Catman figured out how to use Shauna’s powers more than she’d ever thought of before. It’s nice to see characters grow a little. Even if she’s now in creepy love with him.

It doesn’t bode well that we’re only on the third issue of Secret Six and already we have a new artist. That usually shows DC isn’t committed toward the book entirely. Which is too bad, but I also feel that Simone isn’t fully into the crew this time around.

Eaglesham’s characters do seem more like caricatures, especially since many of them are overly-muscled on purpose.

Not sure how I feel about the reveal that 1) the bad guy who locked them away was Riddler and 2) that Big Shot, the only character who seemed halfway decent, is working with him.

The Riddler just doesn’t seem to be a long term sadist in the way that many other villains in the DC universe are. Even if he could put together the ultimate mystery around who he is.

I’m surprised Black Alice allows Big Shot to treat her like such a child. Doesn’t seem like her nature.

Puppets who do sexual harassment are so boring. Seriously. Also gross and creepy. I don’t like puppets.

Catman continues to make eggs and beat up those who abuse animals. I love how he has a cat, which Ventriloquist has adopted, and a dog. And Mary. So many characters who just want a home in this story.

Yeah, I wouldn’t mess with Ventriloquist or Porcelain on their own, much less together.