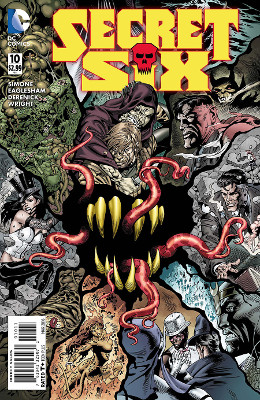 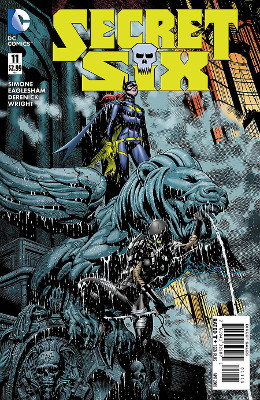 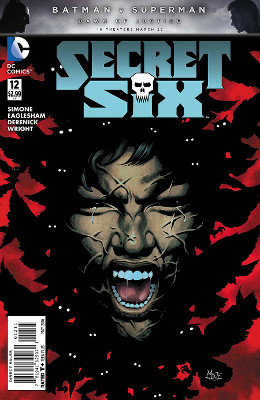 I really want to like this book so much. I rather think the entire team fucking up so badly that Superman had to clean up their mess spoke volumes. Even if Porcelin could crack Superman and Shana toss him like a puppet.

I’m never a fan of when Jeanette goes down. Way too damsel in distress.

Scandal having to kill Black Alice was intense. But far more intense to find out that’s what the creature who was controlling her really wanted. And that she was already dead. Though seems like whatever’s using her body left some mislaid humanity behind. Going to be extra awkward when Scandal runs into the crew again.

But mostly, the entire arc seemed super anti-climatic in that they just end up back at Ralph’s house as if nothing happened. Once again.

Yeah, I’m going to have to agree with Catman that there’s no reason why Batgirl and he must fight. Also wow, like 20 cock shots of Catman. Oh, Simone’s art direction. I did really laugh at when Perp rolls over and wants Batgirl to pet his belly. It’s so true that Catman’s cats would kill her instead.

Oh, Strix, poor Strix. Loved her continued struggle in finding herself. The hug between her and Porcelain was the very best. The whole entire scene just gave me all the feels, and probably anyone who’s been told beauty is the only trait worth having.

Somehow I bet Sue’s homecoming isn’t going to be the warm hug that Ralph wants. Even without Shiva showing up. Somehow I think Batgirl’s going to come in pretty handy. Though they may need the rest of the original Secret Six team, whose talents are more attuned with taking out Shiva.

So I’m not really seeing where we’re going here or why this would be the next plot. I can see why the League of Assassins would want Strix (and any of the other surviving Owls). However, I’m not entirely convinced that Shiva could take out all of them. They may not be the most coordinated team, but they do have a lot of raw power and motivation to stop Shiva.

I can see why Batgirl tried to save Strix. However, she was rather useless.

Oh, Liana, Knockout, and Scandal want to have a baby, and they’re considering Catman as the father. Or perhaps he’s the only option. I assume this means the New 52 wiped out his and Cheshire’s child.

Nice to see Sue back. I don’t really have any stake in Ralph or him remembering how to be the Elongated Man. Mostly glad to have Sue back because Simone’s just glanced over the fact that the Riddler’s spell likely means Sue was raped at most and definitely means she was sexually assaulted by him. Which just makes me so sad.

I really wish I enjoyed this book more.