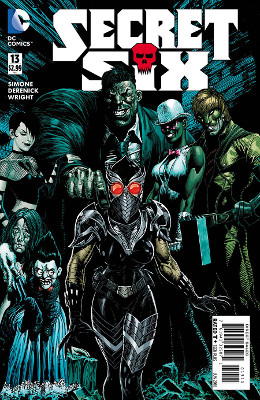 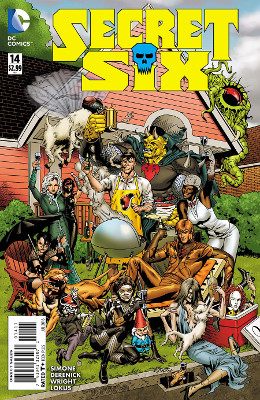 Yeah, I’m still not feeling this coming together of Secret Six take two. I don’t really believe that theses characters have developed affection for one another. Certainly not enough for Ralph and Sue to open up their home. Especially since the Dibneys were such goody-goodies previously. (Before clearly DCU editorial said, use them, Simone, we don’t care about them anymore.)

The scene with Hennings and the other police officers felt preachy. As if Simone was trying to make a point about how bad regular people can be good sometimes and about cops. It felt like an unnecessarily moralistic lesson, in otherwise supposedly debaucherous comic book.

Scandal asking Catman to be the biological father of her and her wives child(ren) felt like some silliness. I have so many questions like who’s going to get pregnant? Just one of them? Will they roll that die more than once? Or bet on Catman’s super sperm?

Not a huge twist to see that Lady Shiva has a self-serving purpose in getting Strix to become the new head of the League of Assassins. Though she’s realizing just how underdeveloped Mary is.

I was meh on Strix having to fight a mashup of her former colleagues. I don’t know how Shiva expected anything less than for her to slaughter them.

This ending sadly seemed pretty obvious. I’m not sure if Simone was planning on ending the title or this got swept up in Rebirth action or a little of both. Sadly, this book didn’t click with me the way that stories previously have.

I like the part about Catman having nine lives. It rather fits the rolling theme of so many formations of the Secret Six through DC’s reboot mania. It makes sense that Shawna would be the one to kill him.

Also thought it was fitting that Fredie died — we were promised a death way back in the beginning. I can do without a foul-mouthed, terrible puppet.