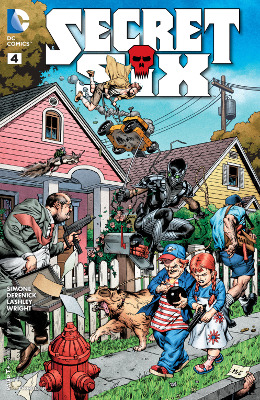 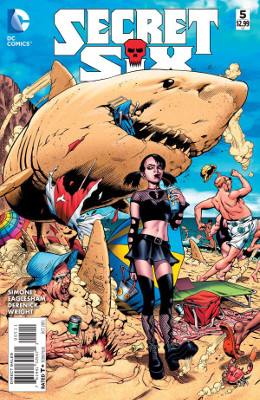 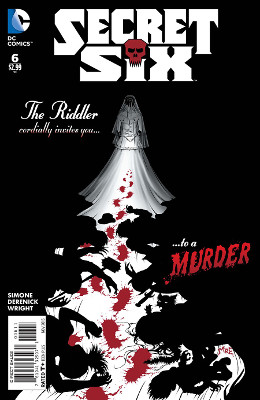 This book still isn’t grabbing me. Even with a camo of Scandal, Ragdoll, and Jeannette, who two of the three I miss a lot, I still don’t have a lot of connection to this story. The reveal that Scandal gave Catman the kitten was the best though.

Also Porcelain being able to change genders based on what they decide that day was excellent. Especially since we saw them as a woman for the first three issue and Simone held off on this reveal. Big Shot handing Porcelain his fedora was a nice touch.

That said, I don’t understand how no one thinks there’s something off about Big Shot and how he acts. Like the suburban living is a dead giveaway that he’s kind of evil. Or hiding something huge.

Also there is again and again a threat of someone dying. Maybe it’s being a tad overplayed in these issues. Can it be the puppet please?

Can we get one artist on this book please? Seriously, five issues in and we’re rotating through three different artists, and it’s just making this book not work for me.

Finally, I am so happy to see some of the major mysteries cleared up by Simone in this book. I don’t know enough about Ralph and Sue Dibny to even guess that he was Big Shot and she was the Riddler’s girlfriend. I’m so happy to see that everyone now knows Ralph was working for Mockingbird and that Mockingbird’s the Riddler. I’m also glad that we find out the Riddler went a bit mad because he couldn’t solve the riddle of who took the India Star diamond from him. I still don’t get Sue’s whole romance (real or fake?) with the Riddler.

Didn’t the last issue promise that someone would die? Was that Mockingbird’s alias? Or Big Shot?

Catman never asks anything politely. I’m kind of loving Porcelain and Ventriloquist just hanging out together. More of this, and less fighting or stupid mysteries. I am curious to see what team shakes out of this. (And how the hell can the Riddler keep Knockout under his lock and key? That makes no sense.)

The lack of a consistent artist on this book continues to make it appear as if DC editorial is not onboard with this title. Get on that. It doesn’t help that Simone’s pacing has been extremely off. What type of story is happening here?

I don’t understand Sue’s motivations at all. Has Riddler done a stockholm syndrome on her? Does she just not remember Ralph and thus not trust him? (Despite that she was drawn in his arms without much protest for a good half of an issue.)

Of course the terrible puppet was the one to steal the India Star.

I also don’t understand how Black Alice’s powers work here or why Ralph is so overly concerned about her wellbeing.

Messy all around. And I really want to like it.