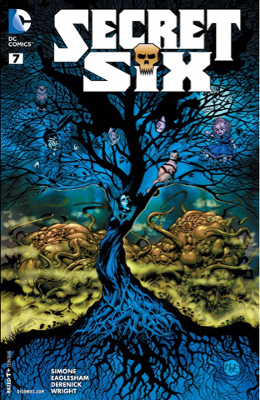 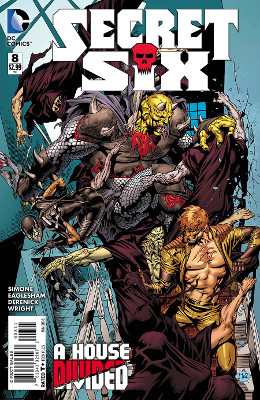 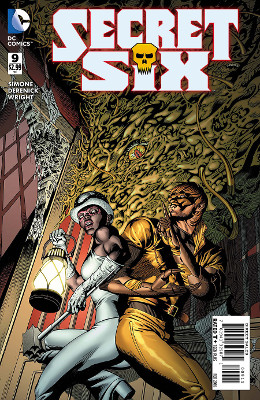 One of the things I’ve always appreciated about Simone’s writing has been her ability to introduce little-known characters (or underutilized ones) from the DCU and flesh their stories bigger. She’s typically a deft writer when it comes to taking care that the reader really learns who they are and what they are about. That their stories unfold a slow, burning manner and drive her tales deeper.

This has been this run of Secret Six‘s biggest failing.

In many ways, this book assumes you’ve read Simone’s work on previous Secret Six incarnations and that you’re familiar with her Birds of Prey and Batgirl runs. I’ve read them all and still struggle to understand the motivations of this new team and the drive that keeps them together and say playing a casual game of b-ball.

This issue particularly highlights this for me in that we have a slew of “new” magical characters. Most of them are DCU second, third, or fourth-tier characters. Rarely have any of them ever had their own books. There are a handful of them I don’t even recognize. So charming.

Additionally, I’m not a fan of women/girl characters who are too powerful for the world and thus, they must be depowered/locked up/murdered/etc. Been there and done that a zillion times. (Superhero comics’ most famous too powerful woman being Jean Grey/Phoenix.) Don’t need to see Black Alice go through this again.

Even with the much needed addition of Jeannette and her ever-lovely sense of self, this book’s still not doing it for me. (Also, since when does Jeannette openly tell people she’s a banshee? I guess we just needed that excuse for her to join the team.)

Of course, Catman was played by the Atlantean monsters. He’s been played since the very beginning. Sigh, they really need a Scandal Savage as their leader.

The fight between Aquaman and Catman was sheer perfection, and also brought back some of the classic Secret Six love. Goddess bless Simone and some art direction for Aquaman butt.

I suppose that I should look up if there’s some kind of magical convergence happening in the greater DCU. It doesn’t seem like this story direction could happen all on it’s own. I’d rather see smaller tales with this book. More of Ralph digging into what he offers them, more of Black Alice just being herself, more time where Catman makes eggs, more Porcelain. Yes, way more Porcelain.

I ship Porcelain/Jeannette forever. I want this ship to happen so badly; I didn’t know it before but now I do.

This issue flowed quite a bit better than the previous several ones. The character herd’s starting to thin down. Not to mention, some quieter moments and character-driven ones amongst the action. Like Strix insisting on a prom dress.

I’m glad they finally realized that perhaps destroying the world to save Black Alice is not the best plan. It was annoying that Freddie was the only one voicing anything against the removal of the pillars.

Not sure why Catman wouldn’t like the smell of tuna. My cat goes nuts over it. Also, Aquaman’s definitely one of those characters who’s a vegetarian because he talks to animals. (Yo, DC editorial, remember if they can talk to animals, they aren’t going to eat their animal friends, re: Wonder Woman.)

Jeannette and Ralph smashing the Elder God was pretty gross. Not any grosser than the citizens it had trapped deciding to eat it. I wouldn’t expect anything less from a Simone book.

Still not a fan of the Black Alice has to die plot. Catman, Ralph, and company isn’t going to be thrilled if they come back to find her dead at the hands of Scandal Savage. I hope Simone doesn’t go with the obvious.