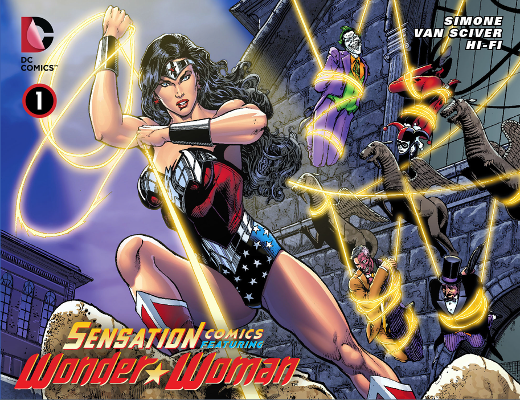 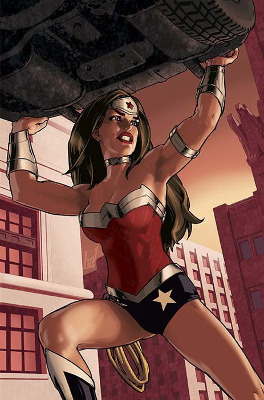 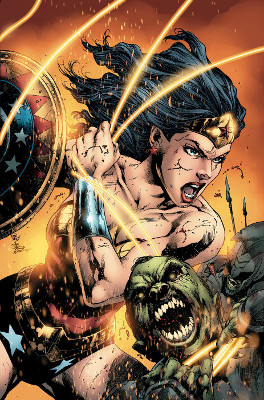 This book felt like just what I needed in order to wash out the taste of the terrible ongoing Wonder Woman comic in this brave new 52 world. Also, it’s amazing to see that with all the male heroes who get multiple books every month that Diana gets two now.

This is indeed the Wonder Woman I love. There were a lot of great aspects about Diana pulled out in this story. I love how fierce she is and her daydream about how they don’t want to know the warrior side of her. She does kill monsters. I also loved her bringing her sisters into the story with the Amazon warriors, saving women and children, and also making Catwoman and Harley Quinn her honorary guards. I’m surprised Ivy didn’t drop everything to join the crew.

The “W” throwing stars were a nice touch, especially being in Gotham and the use of batarangs. And I’d always wondered what would happen if those villains were wrapped in Wonder Woman’s lasso of truth. Solving Batman’s problems for him.

I also adore how Simone brought Oracle back into the fold.

The first thing I really loved about this story was Staggs’ adjustment of Wonder Woman’s uniform. I loved the clear shorts look, like someone might wear when going to the gym. The boots were great in blue and with a low heel.

Unsurprised to see Circe back and up to her typical tricks. Pretty much predictable that she would try to make Wonder Woman kill the humans she’d turned into centaurs.

The side story about the little boy being mocked by his friends for liking Wonder Woman and then Wonder Woman telling them that she’s for everyone was perfect. I loved it so much. So very Wonder Woman. And wow, I to wish to have a bit of the magic lasso.

Taketh Away by Ivan Cohen
Art: Marcus To

Called Dr. Psycho being involved in this story right away. From Wonder Woman’s headaches to the weird suggestions, it just played out exactly like something he would’ve done. Especially since the reporter guy could’ve been a little less shifty and conflicted so we, the readers, wouldn’t have known that something was up. Too obvious is too obvious.

Which most of this story is. It reads pretty simply as Wonder Woman taking on misogyny and what it’s like for women without powers. And frankly, we did this in the 1960s with her. The guy with the gun who made fun of her for being a woman and not Batman or Superman was very heavy-handed. Even if I did like Diana’s comeback about how she doesn’t have a code against killing like they do.

The fight with Cheetah was a nice break away from the he-man woman haters’ club. It almost made me think that perhaps the gods were punishing Diana for what she said about them. It’s not like we haven’t see the Greek gods be petty and jealous before.

I did adore, however, Wonder Woman’s closing line where she said, “It’s my belief in me.” that kept her going and not completely under Dr. Psycho’s spell.

Loved this shortening of Diana’s growing up story. This is exactly the kind of tale that could be easily adapted — except for the bullshit about her not being clay — for a movie version. Like this is how you modernize her, and it seems to be pretty easy since Bischoff and Williams tell it in only a few pages.

It was cute and sweet. A nice tale about mother and daughter and how different they are than each other, but very much the same. Diana’s interest in getting off the island, in general, was interesting, but I don’t think needed. I think she could’ve been curious about life in general. Always inquiring about life beyond herself. This is one of the things that makes Wonder Woman powerful.

I love Sauvage’s art. It’s an amazing modernization of Wonder Woman’s costume. This is how you do it other artists. I’d love this outfit as some casual cosplay.

One of the amazing aspects of Wonder Woman’s character, which sadly doesn’t get enough attention, is her commitment to women and girls. Loved her taking the time to get to know Sophia and Nadia and being truly their hero.

I wish that this story was the extreme of the misogynist man getting turned down for a date and then becoming violent because he’s rejected created for fiction. Sadly, there’s recently been several women beaten and killed for turning down romantic advances. Like a woman being shot because she turned down an unknown man’s offer of a drink at a bar kind of violence.

Dang, I love Mebberson’s art so much. I miss those Muppets comic books. Masters also does a wonderful job writing both Catwoman and Wonder Woman and how different each of them are.

I always like Diana written with some humor. Her not getting her morning coffee is hilarious. And being jetlagged. It’s a nice way to humanize Wonder Women — something she’s often criticized on — in such a simple way.

Catwoman trying to pull the wool literally over Wonder Woman’s eye was pretty cute. Of course, she fails because Wonder Woman. And it’s always fun to see her fighting a dragon and getting to coffee.

No Chains Can Hold Her by Gilbert Hernandez

I’m not a huge fan of Hernandez’s work in general. His characters often come across as wooden, and his Wonder Woman reads that way to me. I think his Supergirl is more relatable and more going to be what shows the emotions here. We’ll see, I suppose.