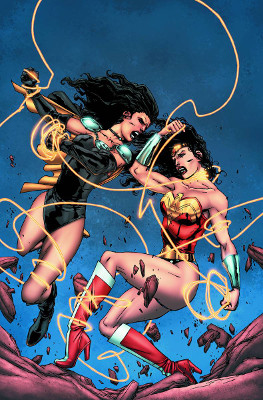 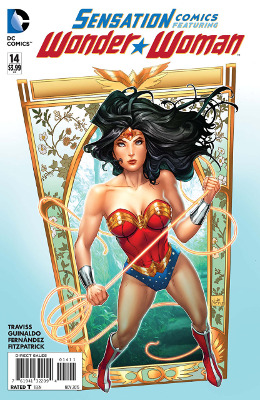 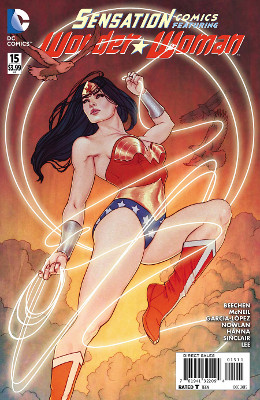 I have such mixed feelings about this book. In many ways, Kesel brings Diana’s personality as too alien, too Amazon, and in other moments, I was super happy. I’m also not a fan of Lois as evil Superwoman, but I’m assuming that’s some DCU plot I’m unaware of, and I won’t drop that on Kesel’s writing. Diana was inconsistent.

On one hand, it was great to see Diana challenging the young women, especially Jody. On the other hand, Diana explaining some of her backstory and how she explained her triumphs were off-putting. With positioning Jody as such a big fan and the other girls as up on superhero culture, there was no need for the extraneous information. While it’s awesome to be proud of your accomplishments and comment on them, Diana hasn’t been a bragger of a character in the way say Lois totally would be. Diana’s comments about her speed weren’t encouraging of sisterhood.

I also had major issues with Diana’s speech about fairness. If we are to believe that Themyscira is a paradise and at peace, then fairness would be a big part of that. Justice — which is one of Wonder Woman’s major focuses — does indeed have to do with fairness and leveling the playing field. Will that make Jody run faster than Diana? No. But it does acknowledge differences and compensates for that. Kesel’s Wonder Woman lacks this sense of justice and greater compassion.

Then there was the moment where Nanc comments about how her mom doesn’t think Wonder Woman should wear a bathing suit. When Diana talks about how women can wear whatever they want, I cheered loudly. (This moment came but a page after the fairness speech.) I loved how Diana basically says she doesn’t actually need any clothing to protect her body, then mentions what clothing is for (weather protection), but how she knows being naked will distract people from her message.

However, this gets deluded the moment Lois, aka Superwoman, shows up. Diana and Lois essentially start fighting over who’s the best in terms of who will Superman stick his penis in. Diana all but calls Lois a slut, and Lois calls Diana sloppy seconds. This is even more enhanced when we find out that Superwoman is pregnant, with I’m assuming Superman’s child. Which even more weirdness when Diana then basically refuses to punch Lois because of the baby.

I absolutely hate when women are pitted against each other. Especially women who could be great friends and have been. Especially when it’s all over a man. WHO CARES ABOUT SUPERMAN! This message is mixed with Jody, Nanc, and Alicia working together and being friends. Though Diana and Lois’ problems read as completely the reason why the girls think that Wonder Woman abandoned them to evil Lois.

I also wish that there’d be only one artist on this book. All three artists were good ones, but the consistency issue rose even more to the surface with different artists. I get that when this was released digitally, each chapter was it’s own separate week, but all put together, makes it less congruent. I’m just not a fan of how publishers so easily switch artists when an artist gets behind — rather than delay the book — or when they need them for another project, etc. It seems like switching artists mid-book should be an exception to the rule, not a common practice. When I think of the best books out there, they have consistent artists. Where would say Saga be if Staples wasn’t the artist on every issue? Like authors, artists aren’t interchangeable with each other.

Well, this is a dry story. Like that turkey your grandma left in the oven for far too long. This the diplomatic-style story which makes people think that part of Wonder Woman’s characterization is so boring and why can’t she just be a War God. That’s way cooler.

Of course, the other issue with this story is that it’s not a story about Diana. We actually don’t know much about what Diana’s thinking, planning, or really caring about. Instead, we know all about Stryfe and Eris. Even Mother Night and the disputing politicians ready to bring their countries to war.

Wonder Woman is untouchable here and causes her to be somewhat unrelatable too.

What this issue does illustrate is how making the Amazons segregate their brothers (and then kill them) is so problematic. As Diana states throughout this issue, she is there to teach the world of the patriarch how to have peace, and she has no ethical leg to stand on. Her own people are morally suspect. And how can she even be an ambassador if she’s renounced and left her own people due to their actions? This makes no logic, and this plot “point” would’ve been better just ignored by Traviss.

I really wanted to like this story much more than I actually did. Beechen’s attempt to show the actual impact of super villains and their ability to escape again and again and not be killed by our heroes (or anyone else for that matter) was strong. But overall, this story didn’t come together in the same cohesion it needed.

Essentially, we see Cheetah as completely irredeemable and the prisons as not adequate to hold super villains. Which is square one. Only Cheetah’s aunt seems to be slightly changed by the entire story.

It is nice to see what happens after the battle, which most superhero stories actually focus on.

Both Ends of the Leash by Carla Speed McNeil

This was another story that I really wanted to like. I’m always a fan of stories which actually address Wonder Woman’s ability to talk to animals. So many writers forget that she can do this.

In general, this story could just be about pet ownership gone wrong. After all, it doesn’t really look into the whole keeping a wild animal, a big cat, as a domestic pet. Instead, this is very much the story of someone who got a pet, but when the responsibility got too much for them, they neglected said pet, their pet got out of control, and then they looked to get rid of it to a kill shelter.

I did love the story that Diana told about her childhood. About how she drove her mother crazy and was full of energy. And how Diana went on “errands” for her mother in order to both learn and to run all that energy off. The direct comparison of young Diana to the lion humanized this story beautifully.