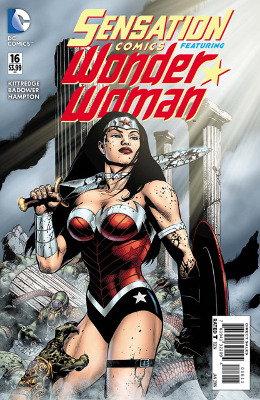 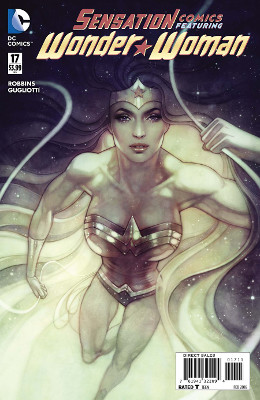 I struggled with this story. I really wanted to like. In general, I was fascinated to see what kind of horror tale Kittredge was going to tell, since that’s what she does. Not surprising to see this mystery involved kidnapped children.

In some places, Wonder Woman felt so true. I loved the contrasts between how she acts and how Gotham City often runs. I appreciate the moments where she talks about how she likes to see the results of her actions, which is hard at a fancy charity dinner.

However, there’s no way the doorman didn’t recognize Wonder Woman. There’s no way he’d give that kind of condescending advice to her. If Diana was truly a secret identity, it might be different.

While I get that Diana would fight Echidna as one of the many monsters of mythology, Wonder Woman referring to her multiple times as a “freak” and having little to no compassion to the people of Gotham she deemed “freaks” read so wrong. Wonder Woman’s main mission is to help people, especially women and children. It doesn’t read true that she’d turn someone down because of what their face looked like. Her hesitation should’ve shown more clearly as her history with Echidna and the history of the other bad guys in the story.

I’ve never seen Batgirl this cold to another female hero. That also read as off.

Loved to see Harley back in her older costume in Hampton’s art. Generally, I really enjoyed how solid, real, and tough he made Diana. When Echidna calls her the Amazon’s “My-Size Barbie,” I found myself thinking of how I wouldn’t mind a Barbie that looked like this Diana. Of course, Echidna also calls out Wonder Woman on her beauty here. And there’s something to be said about how there’s no female Deadpool. (In that Deadpool is deformed with cancer and Lady Deadpool isn’t, not that she isn’t in all other ways, female Deadpool.) And how at the end of the day, Diana was bless by Aphrodite in the looks department.

A Day in Our Lives by Jason Badower

I loved this story so much. Every single part of it was all Wonder Woman in all her wisdom, glory, fun, kick butt, and caring nature. This issue got a ton of press for Diana officiating a wedding between two women, but as a Wonder Woman fan, that’s only a small part of why this story was so great.

The only part I wasn’t a huge fan of was the photo realistic art, which is mostly a style thing. Badower uses model Donna Feldman as his reference for Diana. I’m actually surprised he didn’t use Gal Gadot, given her upcoming movie role. Especially since Lynda Carter was who he drew her as in Wonder Woman ’77.

Loved seeing Diana and Kal-el’s relationship portrayed here as a deep, respectful friendship. The moment where he flubs on her being a special UN ambassador to the touching turn of her declaring that the Amazons will be adopting “kal-el” as their word for “brother.” I may have had some feels.

Seeing Wonder Woman survive a bunch of tank blasts and other modern warfare devices and be standing there without a dent was glorious. Same with Superman just letting her do it and not intervening in anyway to save her. Because he knows fucking better.

In spite of the press and the great celebration of the laws changing, Diana saying, “Clark, my country is all women. To us, it’s not ‘gay’ marriage, it’s just marriage.” was beautiful. She totally took him to school. Especially since he’s clearly the stand-in for readers in this situation. Loved it. Yes, Diana would definitely officiate weddings of her friends. But wow, holding the lasso of truth while saying your vows, that’s some commitment.

Adored Diana letting loose and using her power to break down the dam. Nice to see her having fun in her work and making jokes about her hair.

Loved this story so much!

I’m so sad that this book is ending. By far, this has been the best represetentation of Wonder Woman in all of the current books being put it. Each story really gets to dig into the essence of who Wonder Woman is. If people are questioning her many talents and facets, they really need to look no further than this book.

(Also it seems this was canceled due to editorial team in-fighting with a claim that it was because it was selling low in single issue print runs. What? A digital-first book doesn’t sell super high print numbers! Who the fuck came up with that KPI? Once again, marketing at DC is a joke. Not to mention the continued lack of Wonder Woman not having her own editorial team and there being a known repeat sexual harasser on the Superman editorial team, which houses her books.)

Okay, I thought it was brilliant to have Robbins send her off. For those who don’t know much about Robbins, she’s an amazing comic book writer and historian, who’s also the sweetest person ever. One of Robbins’ areas of expertise is the history of Wonder Woman, and sometimes there’s nothing better than to read a book by someone who just loves Diana very much.

Loved how this tale brought together many aspects of Wonder Woman. Of course, she is a warrior. But she also shows mercy, even when her enemies like Cheetah don’t understand the concept of mercy and certainly wouldn’t give it to Diana if the shoe were on the other foot. Wonder Woman will help those in need.

And of course, Wonder Woman hears out George Herbert about his research. She makes her own decisions about his ethics and ultimately sees the suffering of the animals and vows to stop him. (Not to mention, Diana knows how Lexcorp works.)

The animal characters were both fun and sad. I appreciated how Robbins’ varied their personalities. Some, like the ferret seemed to enjoy their computer job and those like Molly wanted to retain their humanity, while others like the deer seemed rather interested in going back to life as an animal.

There was also a great mythological look at Cheetah’s powers and indeed what allowed the animals to actually change into animal-human hybrids. It was a nice reminder that Wonder Woman’s books do contain some magic.

Gugliotti’s art was a nice match to the story. It fit the tale well. He did a great job with all the different expressions and body language when it came to the animals.

While I’m still sad this book came to an end, I’m happy this was the last story in it.