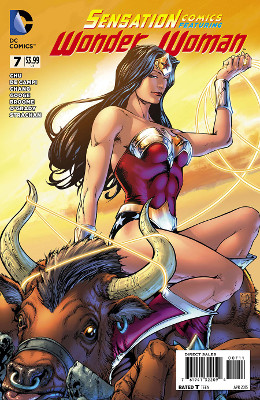 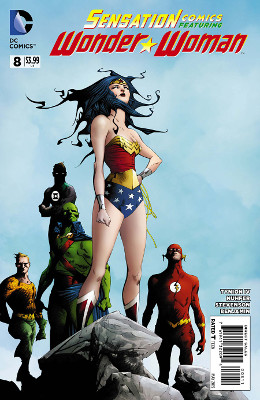 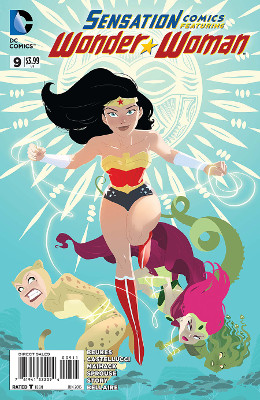 Robyn is just the best throughout this entire story. I love her asking Wonder Woman about her various outfits and incorporating the very modern reality of social media into the story. Love Wonder Woman addressing the sexist ideals even she is put in front of. Plus, this is a great way to address updating Wonder Woman’s costume and her being draped in the US’ colors. Fashion variety is also just fun.

I assume Egon’s namesake is the Ghostbuster, especially with that level of arrogance. And a call forward to the major mystery of what happens when they’re on Venus.

I do enjoy that they’re colonizing another planet that is not Mars.

Certainly a good call to bring Wonder Woman onboard. They would’ve been stuck with that mystery for a long time if she hadn’t noticed Scott’s tattoo on the second monster.

Definitely an interesting tale about how women are inspired by Wonder Woman and her bravery. It’s a solid story about a female soldier, but I’m not sure how much it adds to the Wonder Woman mythos. Perhaps what actually pushes this story forward is that our hero, Angel Santiago, is a woman of color.

While it showcases how women soldiers are needed in military efforts, there is some problems with how it portrays Americans as guides into a non-terrorist and correct society. That’s what we call imperialism.

It is sad to even see at the end of the story that Angel’s strength is questioned, even if we see people do extraordinary things when under pressure and in combat.

Love. Love. Love this story with a young woman Wonder Woman heading to the arcade with Riley and her friends for Riley’s birthday. The story and the art are incredibly fun and enjoyable. It’s like a breath of fresh air into superhero comics.

Wonder Woman on “Dance Dance Retribution” cracked me up so much. Her winning the t-shirt from the guy hogging the game was perfect.

Not to mention that Diana’s not perfect at everything. She gets ice cream on her t-shirt, and she doesn’t know how to rollerskate. The girls just chilling together was too perfect.

Of course, she does punch the jerk guy when he tries to fight for his t-shirt and his honor.

Sabotage is in the Stars by Heather Nuhfer
Art: Ryan Benjamin

This story seemed somewhat short. I liked the space race and, of course, Lex will try to sabotage it. Diana saving the astronaut was great and showing off how she found out Lex’s plot to his face.

The Problem with Cats by Lauren Beukes
Art: Mike Maihack

I continue to love these stories so much. Especially since they bring out all the different aspects of who Diana is and how she inspires people. This one really covers the latter. I adored the fake out of the battle of Wonder Woman taking on Cheetah, Medusa, and Circe, who’d turned Batman into stone and Superman into a pig. Especially what it shows about the imagination of little girls and how they view Wonder Woman.

It was also a great story in that it featured how two sisters came together. I loved all the homemade props the girls had. I remember when I was younger, I did similar things with my Barbies.

Lois Lane is a great character, and I like this defiance of keeping the women pigeonholed as Superman’s love interests, somehow in conflict with each other.

The switch and bait of the questions Lois actually wanted to ask and what Perry wanted her to say / what she did worked well. I kept waiting for Lois to be like “fuck these questions” and get down to real journalism. Of course, this is an all-ages comic.

Of course, Lois jumped into the action when the alien hatching machine robot came down from the sky. I wouldn’t expect anything less. I enjoyed the respect that Lois earned from Wonder Woman.

The social media flashmob was a great way to bring in real world.

Loved the ending with Diana coming to meet Lois at the bar as friends.