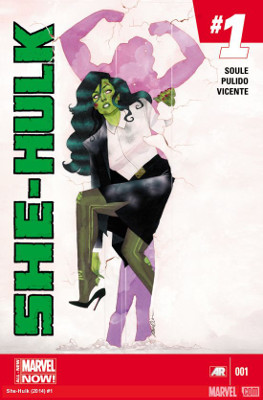 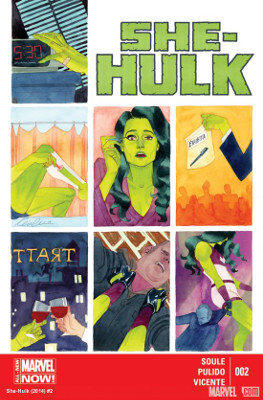 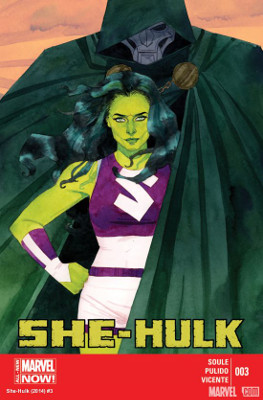 I find it very interesting that Sensational She-Hulk, She-Hulk (2004), and this brand-new She-Hulk title all kick off with Jennifer Walters finding herself a new job. In Sensational She-Hulk, Jen’s kicking off with a new boss; in She-Hulk (2004), she’s fired for being too Hulk-like and then hired by a superhuman-representation firm; and in She-Hulk, she quits an abusive job and goes into business for herself. I’m happy to see that she’s at least moving in a slightly different direction. (Savage She-Hulk features her working as a defense attorney in Los Angeles all throughout the book.)

I’m pretty thrilled that She-Hulk has her own book again. She’s a favorite of mine. Which you know, means I’m super picky about how she’s portrayed. Soule is both a writer and a lawyer, so I’m sure he’ll have an interesting take on some of the legal angles. And even though he clearly had fun with Legal (Tony Stark’s android that is his legal department), I didn’t find the dialog stale or boring.

The one thing I did find was that it lacked some humor. It was certainly a lighthearted book, which is very appropriate for the character. But I do wonder how wacky Soule will be taking Shulkie. She has, after all, had some extraordinary crazy adventures.

I saw some people were concerned that an “A lister” (Tony Stark) was included in the book too soon before She-Hulk really had time to stand on her own. I’m not too worried. It’s not like she isn’t an Avenger and isn’t going to hang out with better-known heroes.

I did enjoy the smallness of the story. How it was about the pro bono case She-Hulk took on. Not about some big crossover, event, or other larger setup for a universe-affecting plot. Instead, it was about one widow and what Stark Industries stole from her dead supervillain husband. And I appreciated that the widow’s check served as the seed money to start She-Hulk’s own practice.

Pulido’s art was fun here. It works for both the story and the character. I’d been incredibly fond of Allred’s drawings in FF, and this is a lovely transition. Though if we have any major fight scenes (or work-out scenes), Pulido’s going to have to figure out how to work in more muscles. But we’ll see what happens.

Looking forward this title a lot.

This title is just getting really fun. I’m so happy to hear something a little lighthearted. I love seeing reality hit Jen. Only to have her landlady, Sharon King, pull her out of her slump and make her realize she’s not the only superpowered one in the building.

Jen’s interview and hiring of Angie Huang was pretty entertaining. Even if I find monkeys, even Hei Hei, creepy and disturbing. Gotta to be a bit unethical for Angie to have chased all the other potentials away.

Love Jen and Patsy hanging out. Of course, they have too much to drink, and of course, Patsy wants to go take on a bunch of AIM guys. Adored Jen working out her issues by fighting with them. Her lecture to them about superheros being people, not just notches on their belt, was pretty hilarious.

My only down-note is that I hope Dr. Doom sends lawyers and doesn’t come himself in the next issue. Though knowing plots with Dr. Doom, Kristoff Vernard is probably either a younger Dr. Doom, or he’s actually a robot.

So I’m not sure how Kristoff didn’t figure out Ernest would be a Doombot sooner than Ernest attacking them. Not a very smart fellow for being Dr. Doom’s son and also having met many, many Doombots. You’d think he’d have figured out some Doombot test by then. Though Kristoff didn’t seem to be the brightest in general.

Even though there was plenty of action, this issue felt really light. Though I’ve been greatly enjoying Pulido’s pencils in every book. I love the cartoony feel, and it’s very much influenced by earlier She-Hulk books, which I love. She always lives in such a bright world.

Loved the fake-out of Patsy standing in for Kristoff. Especially as they beat up the Doombots and Patsy gets excited that’s included in her detective work.

I was a little disappointed that they didn’t find She-Hulk’s flying Dodge convertible in that hangar. The one that can go into space. But an old Fantastic Four car was pretty good.

I’m glad that Dr. Doom was only there for the last page.

Take a journey with Jen and buy She-Hulk Volume 1: Law and Disorder