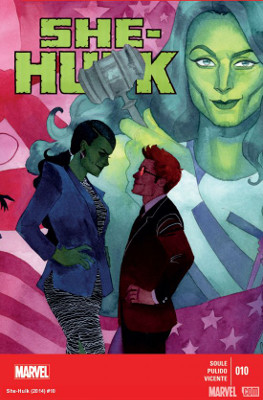 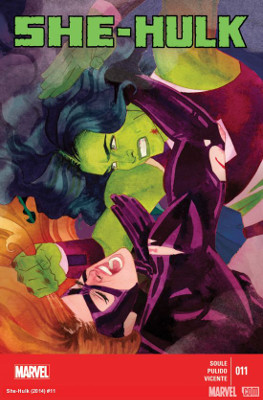 This is just not my favorite storyline. I love to see Jen lawyering, but the entire case against Captain America was just silly. Like there was no real threat of him ever going to prison. There’s no way you could find a single juror who wouldn’t have an opinion, or be unbiased about Captain America; and he’s freaking Steve Rogers, who is impossible to hate.

Unsurprised to see that they uncovered that it was Faustus who was working to destroy Steve. It was funny to see Steve, even as a very old man, be able to kick Faustus’ butt.

I wonder if Soule knew that he was going to have so few issues when he started this storyline. Seems like a waste of potential for the characters and the remaining issues.

Loved to see Titania waiting back in Jen’s office and wanting to talk about that blue file.

Oh, fights with Titania. I have to agree with her that Jen really wasn’t giving it her all until they were far outside of civilization. You’d think that Titania would’ve learned by now not to go against Jen.

Soule seemed to be working out some of his own angst about what people think about lawyers. I’d say in most professions, you can choose to use your talents for good or for evil.

Volcana seemed like a waste here. Though it was nice to see that Angie and Hei-Hei certainly do have some superpowers of their own. Besides teaming up with Patsy to steal the Fantastic Four’s flying car.

Angie is definitely dedicated to telling the truth, despite the spell getting her fired. (Though I imagine that Jen will take that back once the Blue File’s spell is off her.) Of course, it was Nightwatch.

The ending felt weak with the big reveal being that Nightwatch wanted to be a hero. In order to become one, he used magic and destroyed a town. He was happy being a D-list hero more than a D-list villain.

It felt a bit underwhelming with all the build up. Particularly the characters who went a little psycho — like Tigra — at the mention of the Blue File. Of course, at the same time, it’s not like Soule had a long time to wrap everything up.

I appreciated Angie and Hei-Hei staying on at Jen’s insistence. And Angie refusing to say anything about her powers. Seemed to fit her character well.

I love that Soule hasn’t been afraid to hurt Patsy and show that she’s only a human. Her banter with Jen about her broken leg felt very real to how you’d react to a friend, who beat you up and broke your leg while under a spell.