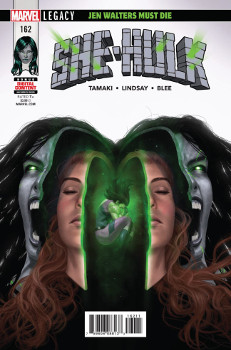 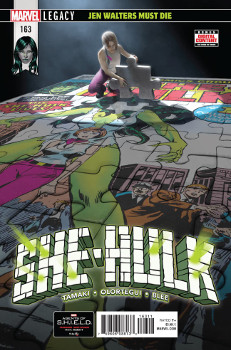 She-Hulk goes to therapy is actually a great book. I like this so much better than a lot of what we’ve had before. There were so many moments when I could see the book I wanted to read in this. (I mean, this is not the worst She-Hulk book I’ve read, but it had the potential of becoming a better one.)

It’s actually a pretty good resolution around grief. I mean, not that there’s ever a resolution because the person is still dead. Except this is superheroes and this is Marvel, and I see that Bruce Banner is back and I’m pretty sure I saw an ad for that in this very issue.

I loved naming the therapist Flo in tribute. A million hearts for that, Tamaki.

Maybe only She-Hulk, when she’s whole and loving herself, can break the fourth wall. Jen can talk to herself, and Hulk can sulk or party.

I don’t know how I feel about Bruce giving Hawkeye an arrow with his name on it. Though it makes more sense why everyone wanted to hunt Hawkeye. (I was only reading the Mockingbird comics. Bring Cain back, Marvel!)

When She-Hulk comes out of her trance — or acid trip — it’s funny to see Flo’s house destroyed all around them. But Flo, of course, unharmed. Hulk never harms innocents.

I have incredibly mixed feelings around this entire run, but this issue was a great penultimate issue.

This issue was so heavy-handed; even though I’m on the same side about stopping asshole bigots, it was too much. I get it. Not only was it heavy-handed, it was clunky. How the story was told in flashbacks, with Jen telling Patsy about, just didn’t work. The tone was all over the place. It especially felt weird as I’d just read Supergirl #17, which also features a high school dance, and that felt emotional and like an actual experience.

Burn could’ve been a cool character to get to know. However, until she decides not to kill those anti-mutant protesters, we’re only told what a great kid she is by Jen.

I’m also not a fan of Olortegui’s art. He suffers from a common struggle many male comic book artists have — they don’t know how to dress characters when not in their superhero uniforms. The dress choices for Jen and Patsy were boring. And even if they were boring on purpose, none of the kids had interesting outfits either. Patsy had the shortest dress of anyone: shorter than the dresses of teenagers.

Speaking of Patsy, it took me a moment to even realize it was her. The realization came because she’s been in this book and her red hair.

I wish the ending issue had been as great as the last one. But so goes this She-Hulk title.