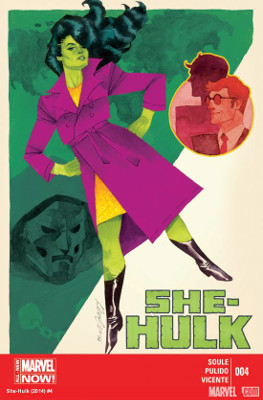 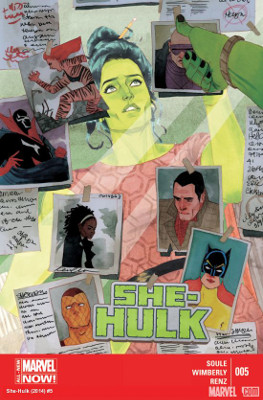 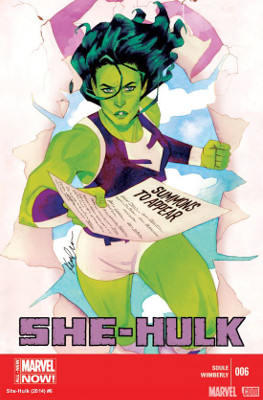 This issue also felt light, much lighter than the rest. So Jen’s not paying Patsy…but she can fly to San Fransisco, then buy a fake passport to fly to Latverina… Just saying that that doesn’t make budgetary sense.

I liked She-Hulk hanging out with Matt. But again, Soule’s bringing in an A-lister character for her to interact with. In fact, with Doom, that makes two well-known characters. I’d like to see Jen walk on her own for a while. It was cute to see them hanging out on top of the Golden Gate Bridge. The commentary about Matt being blind, with radar senses, wasn’t exactly the most progressive statements about disabilities.

It seems right though that Jen would got to Latverina to try to save Kristoff. Even if he is a jerk, even if She-Hulk really knows that she can’t best Doom on her own. I was kind of annoyed by Doom’s and Kirstoff’s assumptions about why Jen did it, but then I realized it was actually a reflection of their characters and the world they know.

I’m interested to see what comes of this case in the blue file. Weird that Jen remembers nothing about it. But then again, they do fight battles almost daily and have done so for many years. Seems like she needs to call Wyatt.

I’m pretty disappointed in the change of artists here. Especially in that Wimberly seems to be phoning She-Hulk in. I looked up his other art, and it’s extremely photo-realistic. So he either got this job last second or the cartoony editorial choice just doesn’t work with him. I’m worried that the book sales will suffer due to the art.

I think the zombie clerk is going to learn not to mess with Angie and Hei Hei. I love their matching parkas. And that she’s the one to sort out their file mess. I have a feeling all paralegals reading this comic book are rejoicing in her portrayal.

Patsy’s fight with Tigra was just weird. I get that she was under a spell or something… But seriously, the whole thing was just off.

I feel there are too many stakes with Jen possibly triggering Wyatt. Those kids he’s pulling up on the mountain…you only need so many stakes, Soule. Too many and the writing gets sloppy, like the movie Elysium where the main character was giving 24 different life-threatening reasons to move forward the plot. It gets a little old afterward.

Still not a fan of Wimberly’s art. It’s as if he’s working on this book very quickly. Sometimes, it’s good, but other times, it leaves much to be desired. It’s a pretty telltale sign of quick work when there aren’t any backgrounds drawn in, and this had a lot of empty backgrounds. Also, the colorist choices seemed very odd at different times.

She-Hulk’s clearly under some kind of spell after getting bitten by those demon creatures. There’s no way she’d treat Angie like that or stop being curious about the blue file. If nothing else, She-Hulk’s curiosity always gets her into trouble. Not to mention give Patsy a lecture like that. Sure, Patsy did get hurt, and while she may not have superpowers, she is a superhero. She gets into plenty of fights.

I do think that Jen’s conversation with Sharon, her landlady, helped contrast how harsh Jen was with Angie and Patsy. She could’ve probably taken Sharon to court. But Jen knows those demon creatures were after her, and it’s the right thing to pay more rent to cover insurance damages.

I liked Kevin Trench. However, I’m taking his offer to (and action to) help Jen find a bunch of new clients as a way to distract her from the blue file. I mean, she is supposed to testify in court.

I felt really bad for Tigra.

Join She-Hulk on her continuing adventures and buy She-Hulk Volume 1: Law and Disorder