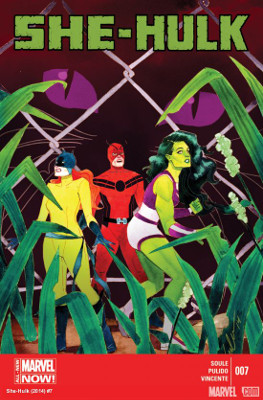 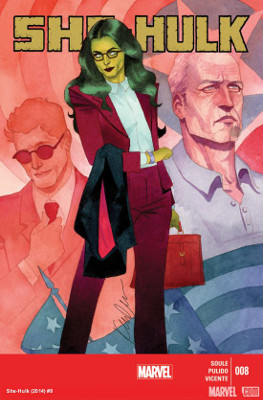 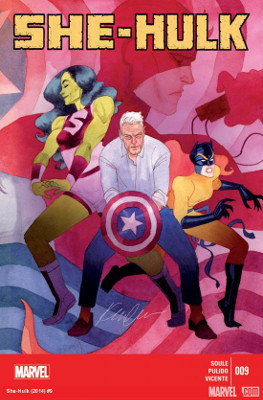 Excited to see that Pulido is back on this book. His style fits much better in She-Hulk’s world. And he knows how to draw cats very well. Things which are important.

I’m never a huge fan of a Hank Pym story. I’m kind of with the characters who point out what a douche he is and how he can’t be trusted. I mean, She-Hulk has hung around him a lot, and she should know that. But apparently, since he’s an Avenger…

Patsy’s joke about how figuring out how to use the ant helmet can’t be very hard because Erik O’Grady did was pretty funny. If you know about Ant-Man III and how he’s a bro. But I’m not entirely sure that people reading this book will. It would’ve been a funnier issue if they had called Erik.

I’m still not a fan of Patsy feeling like Jen’s worried about her and won’t let her be in a fight. Especially given the other issues. I’m hoping it’s just all part of whatever spell happened and the blue file.

Pretty sure this is one of the few times where I can forgive She-Hulk for punching a cat. However, I’m surprised that there isn’t already a story where Jen’s been shrunk down, especially since she was with the Fantastic Four for such a long time. In fact, even weirder that she didn’t call Reed and the family.

Even without the cover, it was extremely obvious that Matt Murdock was going to be opposing counsel. It was a bad reveal to play to until the end of the book. Really threw me off liking this issue.

I haven’t been caught up in Captain America’s world so I’m not so sure why Steve is old. Or his actual age had he not been given youth and frozen in ice. Wikipedia tells me it’s because a villain has neutralized the super-soldier serum in his body. (Good thing he only aged, instead of losing his height, muscle-tone, etc.) Because that hasn’t happened before. I do like Soule taking advantage of this to put Steve in the book. All the women fawning over him was perfect. Even at 90, we love you, Steve Rogers.

It’s nice to see She-Hulk actually taking a case to court. And hopefully, she’ll be able to wipe the floor with Matt.

Captain America continues to be the worst client ever, on the face of the planet. Seriously, She-Hulk needs to know when to have boundaries. Even with Steve. Fire that client!

I have to agree with Jen that taking down Steve when he’s possibly at the end of his life seems wrong. This story fits oddly in the Marvel canon. As if Steve had enough resources and money, pre-war, in order to head to San Francisco from NYC to find Sam seems unlikely.

This is kind of all about why I dislike Daredevil. He’s so in his own world. Somehow Matt thinks Jen should just be cool with him when they’re in superhero mode. Especially when he wakes her up from sleeping, and she’s going out in her PJs.

I do really appreciate the choices of Soule’s and Pulido’s to put Jen in some comfortable sleepwear. That looks exactly like something I’d put on for bedtime.