In 1989, Dwayne McDuffie, along with Robin Chaplik and June Brigman, wrote She-Hulk Ceremony, a two-part mini-series about the Sensational She-Hulk and her ex-boyfriend Wyatt Wingfoot. Stan Drake does the art.

In this story, She-Hulk decides she wants a baby with Wyatt, gets a mysterious mystical basket, and travels to visit Wyatt’s family to announce their engagement. But finds out that it’s much, much more. 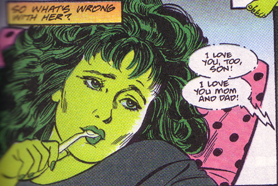 (Okay, She-Hulk doesn’t open the story; a Native America woman and her grandma do and they’re clearly in trouble and trying to fight an evil white corporate guy who’s gotten too close to grandma.)

Instead of wallowing all day, She-Hulk decides to go on a walk in NYC. Of course, trouble is always around the corner as She-Hulk finds herself stopping a bombing of an abortion clinic from killing everyone.

And then not tackling her position on abortion. Just how bombers aren’t cool. Maybe She-Hulk should try politics instead of superhero-ing?

Turns out, She-Hulk knows the head of the clinic, Mavis. They used to go to school together. They head to Mavis’ house for some food and to relax after a very stressful day. (I should mention the entire building housing the clinic fell down. But Mavis and She-Hulk seem really calm about all this.) 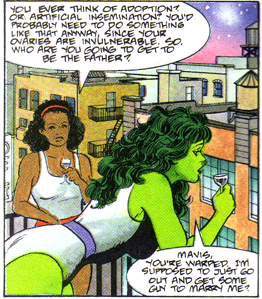 Instead, they talk about how sad She-Hulk is. Mavis suggests that maybe all She-Hulk needs to change her life is a baby. That’s right, not all abortion clinic runners hate babies. In fact, some think it would be great if She-Hulk reproduced, even if she makes some jokes about She-Hulk’s womb of adamantium. And She-Hulk doesn’t need no man.

Except that she does. She’s still upset over Wyatt Wingfoot, who’s her ex-boyfriend and the ideal man to impregnate her. Wyatt is not only a friend of the Fantastic Four, but studying to become a lawyer. 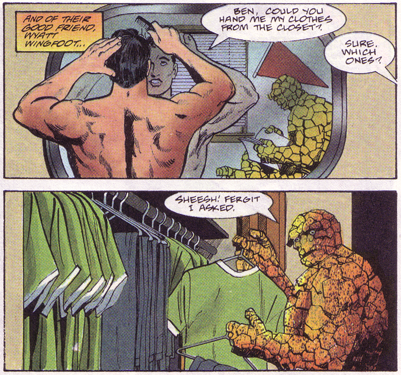 This is perhaps Wyatt’s only good quality as we see here, he’s pretty boring. But his sperm is sure to penetrate this Green Goddess.

She-Hulk also receives a mysterious basket of plot point and Native America origin. She thinks Wyatt sent it and a weird white man shows up asking for her to give it to him. She refuses and the basket must be given, not taken. 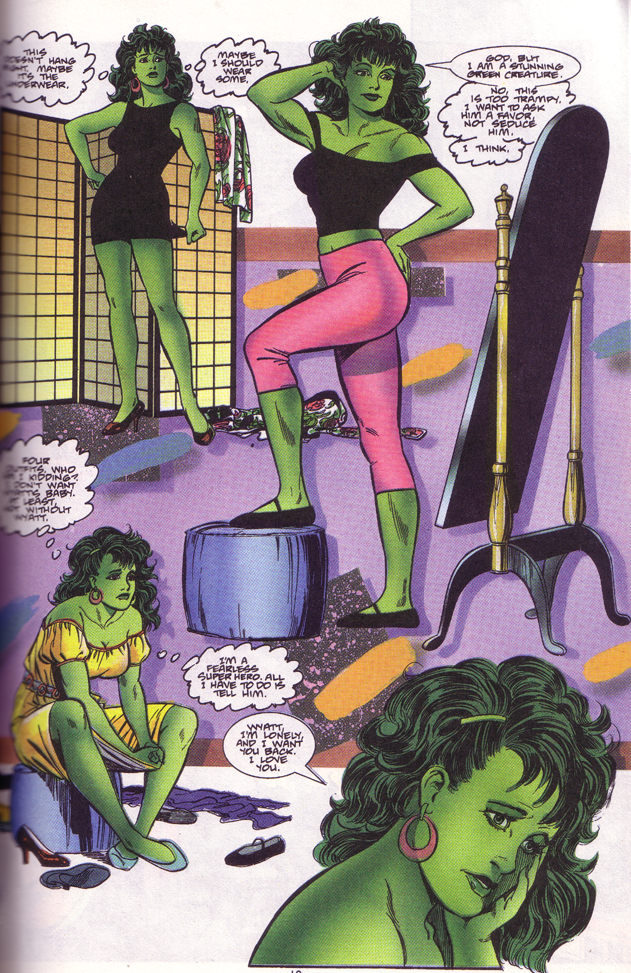 She-Hulk, unlike Wyatt, is a maven of late ’80s fashion. Which just makes her that much cooler. Plus, she’s already a lawyer.

As she’s dressing, She-Hulk realizes that perhaps she doesn’t need a baby; perhaps, what she really needs is Wyatt and then they can have babies, after they’re married and all.

But instead, She-Hulk chickens out and just tells Wyatt that she wants his sperm. 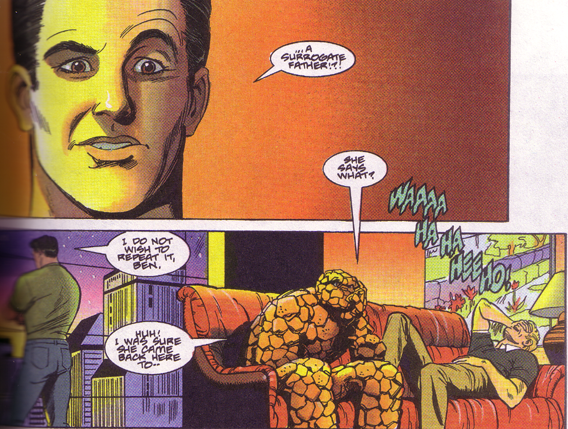 As Wyatt retells the story, Ben and Johnny make fun of him. I know I would. Wyatt, however, thinks he needs to confront She-Hulk to tell her just what a fool she made of him. Dear Wyatt, You didn’t have to tell your friends everything.

Then Wyatt discovers the basket and remembers that it was an engagement present from his mother to his father. She-Hulk really wants to marry him. And we have engagement! 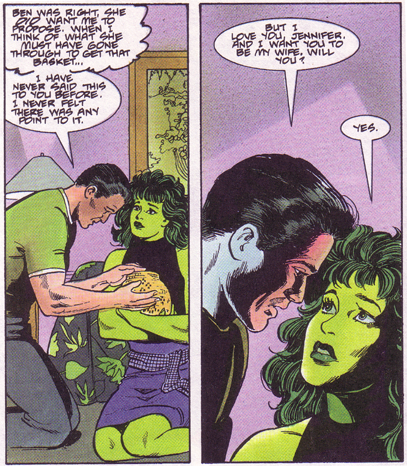 Since Wyatt doesn’t say anything about the basket’s origins, She-Hulk takes it to a museum (This couple’s communication is off to a fantastic start!) where she’s attacked. 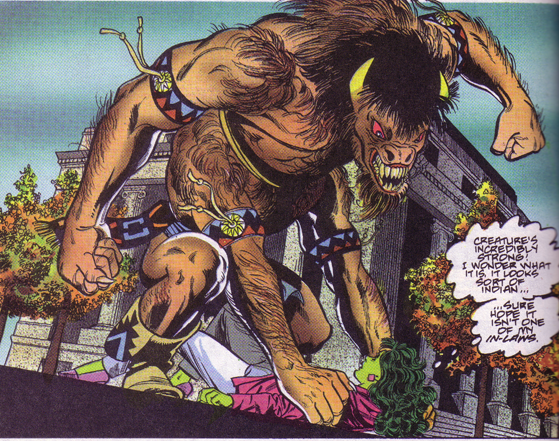 Aren’t all Native Americas related to each other?

Meanwhile, She-Hulk’s female superhero friends and Mavis are doing what superheros do best: throwing She-Hulk a bridal shower. Okay, Tigra’s not helping so much as munching on the snack food. But we always knew she was an anti-marriage slut, always wearing that bikini and flicking her tail around. Of course, She-Hulk misses the entire thing while fighting the beast that’s potentially an in-law.

She-Hulk and Wyatt jet off to visit Wyatt’s family on an Oklahoma reservation as they need Wyatt’s family’s approval. I’m sure the next place they were going to visit was She-Hulk’s dad in L.A. or her cousin Bruce Banner aka the Hulk. Hulk smash wedding! 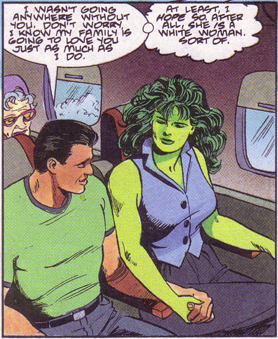 Wyatt suddenly realizes that under that green skin, She-Hulk is actually a white woman. He just hopes his family won’t notice or care. After all, she had been following their cultural traditions in their engagement.

When they announce to his grandma and sister that they’re engaged, grandma thinks they’re crazy and misinterpreted the basket she mailed She-Hulk. (Grandma is seriously my favorite character in this story; she’s all snarky in a “you guys are young and so stupid, especially you, Wyatt” way.) Or maybe it was grandma trying to propose to She-Hulk. Alas, 1989 was not a haven for intergenerational, interracial gay marriages.

Okay, turns out that the basket is magical and the evil white man Carlton, who tried to own the entire town, is after it so he can be all-powerful. The only ones who’ve been stopping him is grandma and all the Wingfoot women, who are witches and the Wingfoot men, who are the chiefs. And poor Wyatt only wants to be a lawyer. 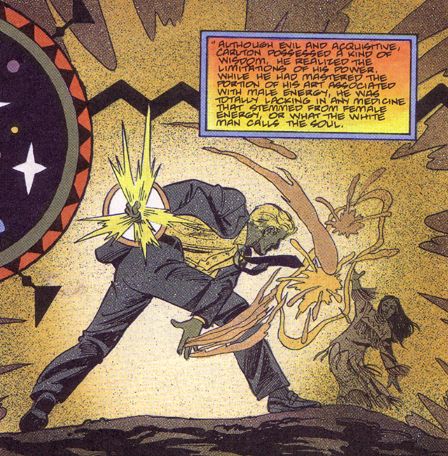 There’s lots of exposition how men are evil and can’t heal as they don’t have vaginae feminine energy. Specifically white men. Also feminine energy = soul. Which means all white men are soulless and evil. Grandma is apparently the female Native American Louis Farrakhan. Not that I blame her since Wyatt is too much of a pussy to lead his people and Carlton is a bastard who killed her sister.

Grandma then reveals that She-Hulk and Wyatt are connected to each other. Of course, this doesn’t mean they should be married. Except that grandma suddenly makes a strange Christian-like comment about them completing each other, despite clearly being a pagan. 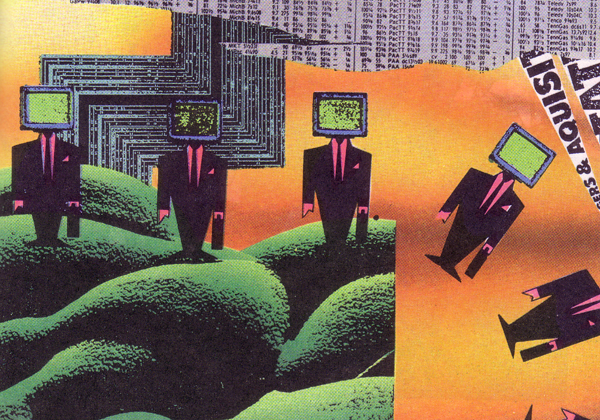 Then Wyatt has a “nightmare” in which he confront Carlton, who is not a man, but Devo.

It should be noted that She-Hulk and Wyatt are in separate bedrooms, just as non-married people should be. And also that Carlton-Devo eats his assistant to prove his incredible evilness, if you didn’t believe it already.

It’s revealed that Wyatt’s nightmare wasn’t a nightmare at all, but a vision quest. However, he has no insight to share, except that She-Hulk saves him, for he is lame. 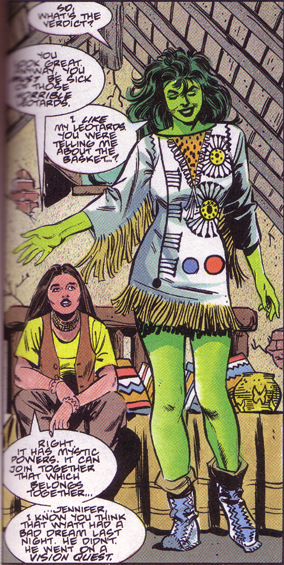 The next day, Wyatt’s sister Rain presents She-Hulk with Wyatt’s dad’s traditional shirt redesigned to fit her. Rain also takes the time to mock She-Hulk’s love of leotards. No, She-Hulk comic is complete without fashion talk.

She-Hulk promptly destroys the outfit when she’s attacked by Carlton and his big snake. I’m not going to touch that one. 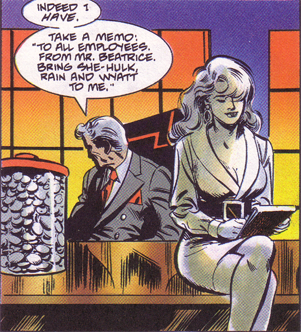 Carlton has stolen everyone’s souls in the entire town. You know a soul is stolen when the person is in black and white. Rain, She-Hulk, and Wyatt go to confront Carlton. Or are pushed toward him by his soulless minions.

Like us readers, Carlton knows which of the trio is the weakest. That would be Wyatt, if you weren’t paying attention.

Carlton steals Wyatt’s souls and puts it in his soul-jar. Which She-Hulk grabs and dumps into her basket. 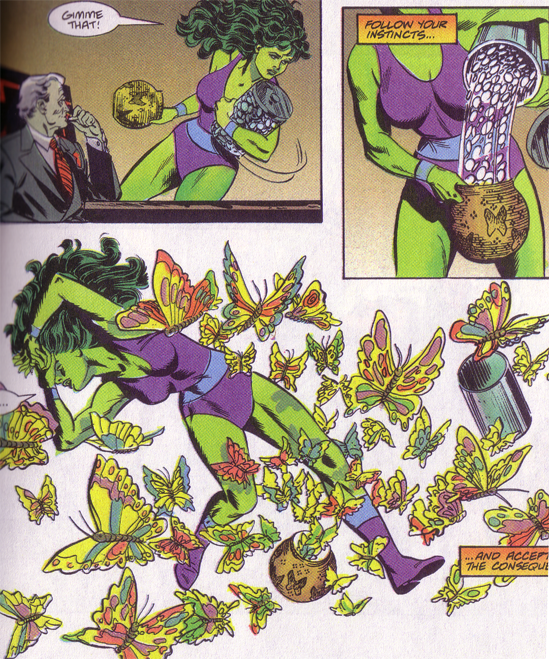 That’s an interesting shape those falling souls are making as they go into the basket. The basket then fills with soul-butterflies that reenter the people and give them back their souls. However, Carlton fooled them. He still has Wyatt’s soul and threatens to eat it! Thus, forever keeping it.

She-Hulk caves in and gives Carlton the basket in exchange for Wyatt’s soul. And puts the entire world in danger for her boring-ass finance because now Carlton can eat the world’s soul.

Now it’s time for Wyatt to become a man and leader of his people. So he and his grandma must travel to another world in order for him to learn everything he needs to know in a few days. He and She-Hulk have a tearful parting. 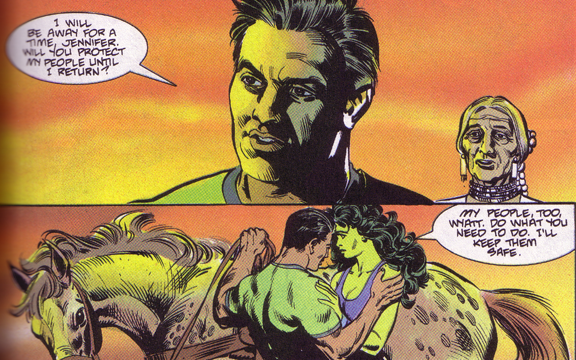 But She-Hulk has vowed to protect his people in the meantime. I mean, they’re like her family too.

Carlton’s company decides to bulldoze the reservation and take all the land’s valuable natural resources. Since they have permits, She-Hulk can’t stop them with the law, but she can with her fists. She’s attacked by wrecking balls, robots, and exploding balls. She’s then captured and carried off in a helicopter. The entire reservation is demolished and moved and Rain believes She-Hulk to be dead. 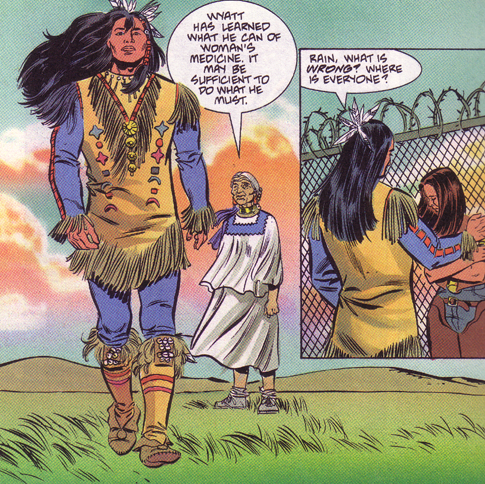 Wyatt and grandma are back. And she’s convinced Wyatt to give up his identical clothing. Think of it like Spiritual What Not to Wear, it’s not only the clothes, it’s also Wyatt’s soul and his hair.

However, Wyatt and his grandma soon find out from Rain that the entire town is no longer there. Grandma is so distraught that she dies as she has nothing to live for. She tells Wyatt that he must lead his people. 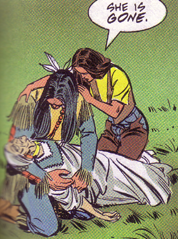 Wyatt, even grandma doesn’t trust you enough and would rather die then try to help you defeat Carlton. Plus, Rain reveals that Carlton has killed She-Hulk. 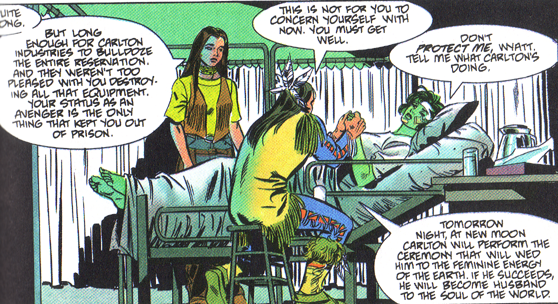 Luckily for everyone, She-Hulk is not dead. And because she’s an Avenger, she’s not going to jail for trying to stop Carlton’s plans for the reservation. She’s just a little hurt, but it’s time to confront Carlton.

It’s revealed that Carlton is going to wed the earth. Yes, that’s right, then he will control the entire planet by marriage! 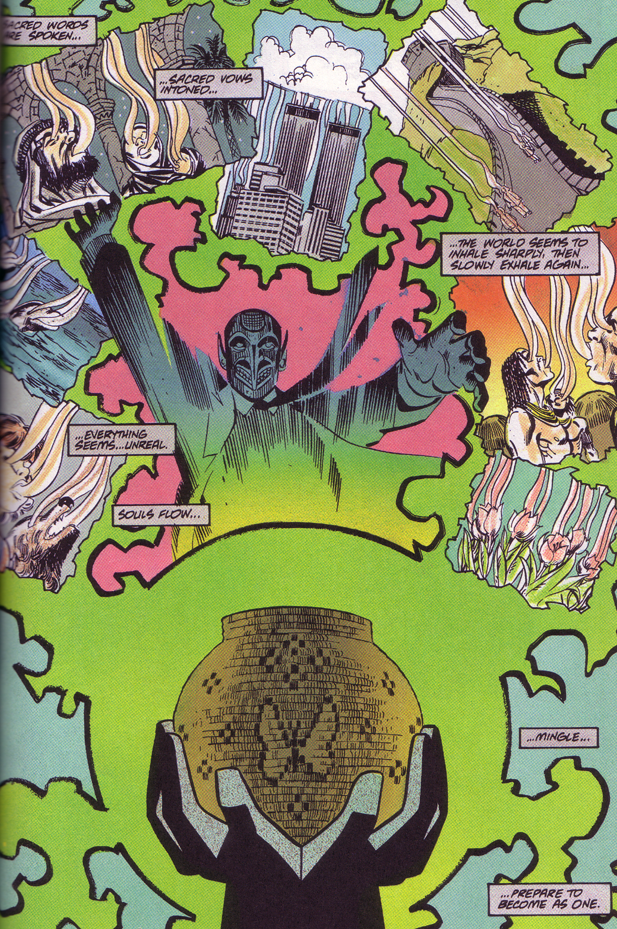 Carlton starts the wedding and beginnings to take over the world, by stealing everyone’s souls. He also gets this mask thing. It makes him look more evil. Not to mention, there is more Biblical “becoming one.”

Of course, She-Hulk and Wyatt take him on. They fight for a while. Then realize what they need to do… 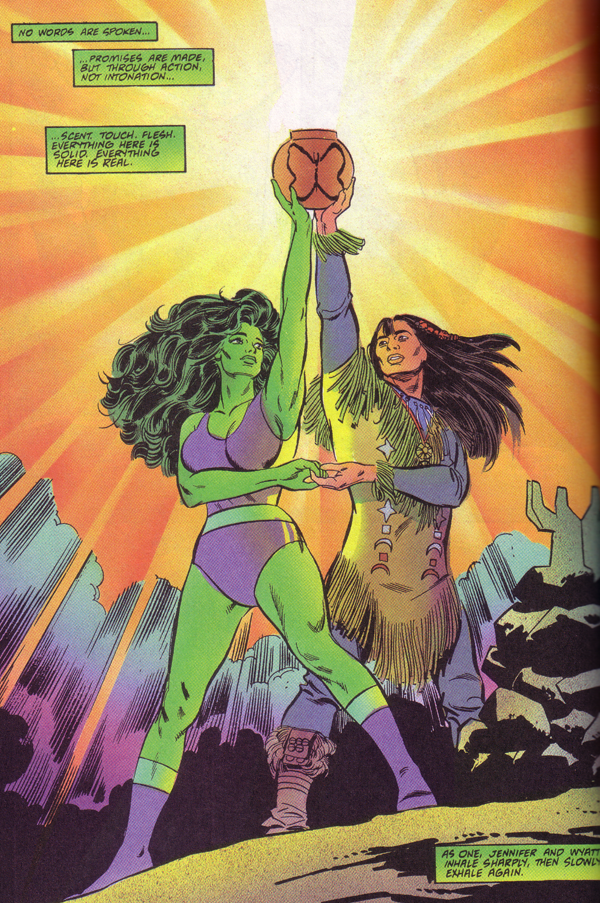 They need to come together to stop the ceremony and create another ceremony. Their ceremony puts the world back together and melts Carlton. Or at least, the only thing left is his empty corporate suit and tie.

Afterwards, the entire tribe throws a celebration for Wyatt and She-Hulk. Carlon has been defeated. Except that, you know, everyone’s homes are still destoryed and Carlton’s company still owns all the reservation.

But they have Wyatt as their new leader. I guess that means he’s not going back to law school… 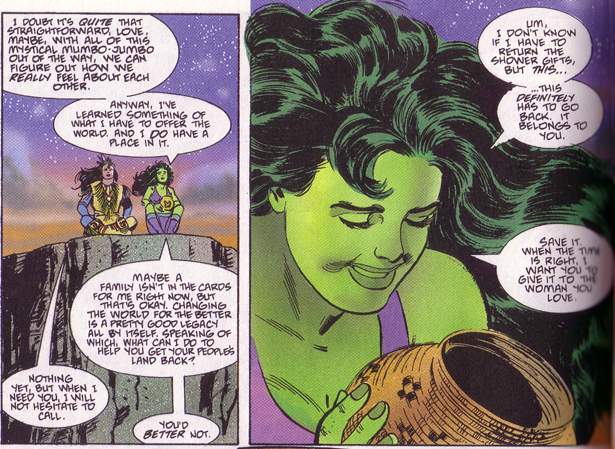 Later, Wyatt and She-Hulk sit together on the bluffs. They realize that their engagement had to do with them confusing their mystical paths moving them toward this fight with their former romantic feelings. Oops! They no longer want to marry, and She-Hulk is unsure whether she wants to return her bridal shower gifts. They’re way more important to her than the basket or Wyatt’s love. Plus, She-Hulk has had enough weddings to last a lifetime.

Thankfully, She-Hulk does find a bigger mission than marrying Wyatt and having his babies at the end of the book. Which does redeem it. A little bit.