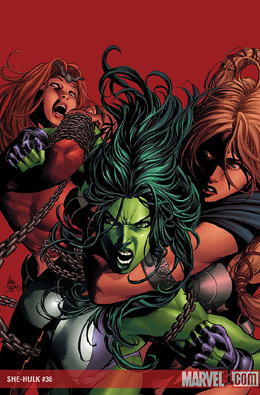 Spoilers for She-Hulk #36 by Peter David

This storyline has perhaps been the best that Peter David has written during his run of She-Hulk. (A run which has been canceled due to shoddy storytelling.) With She-Hulk and her fellow Lady Liberators out in the larger world and helping those in need, David is taking on more what it means to be a superhero and have super powers.

However, I wasn’t a fan of #36, the ending of this arch. The President of Marinmer, Darquon Par, invites She-Hulk to his mansion and into an obvious trap. He ends up also capturing the Invisible Woman, who’s followed She-Hulk as back up. Both Jen and Sue are chained up, spread eagle, in separate rooms.

Jazinda shows up to save Jen and Sue. She offers Darquon’s life to Jen. And it is only when Jazinda points out that Darquon could’ve raped Jen (and Sue) that Jen gets mad enough to take Darquon’s life by bashing his head in with her fist. Of course, Sue prevents her by putting a force field up.

My problem is that David has already built a reason why Jen hates Darquon. He already showed the devastation and destruction that lack of aid and a war has caused on the people of Marinmer. Jen is already mad. At her core, Jen will always be about justice, and frankly, it was rather cliche to have it be a threat of rape that causes Jen to almost kill this guy.

She-Hulk has two more issues before cancellation, and the ending of this seems like we’re going to have another Jen in jail issue and hopefully, the makings of a Lady Liberators’ mini. And just for sport, check out the She-Hulk boards, where someone claiming to be Peter David (who is possibly actually PD) gets in the fanwank at whether or not his writing caused the cancellation.