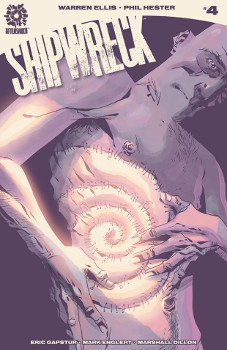 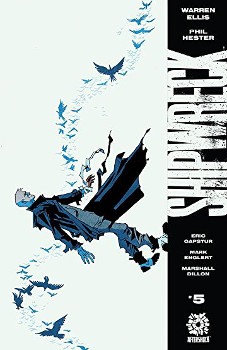 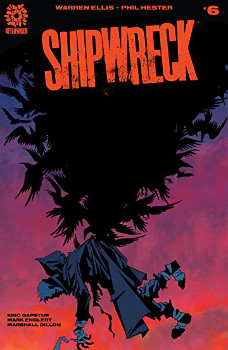 This book feels like it’s not moving much of anywhere. Maybe Shipwright meeting Nina Zandar will help this stuck book.

Most of the reasons why Shipwright and others were seeking alternative worlds seemed obvious. Also that he was in an alternative universe.

The only new facts are really that Shipwright’s earth was dying, and they couldn’t get to space, so they go to alternative Earths to mess them up. Though I’m not sure this Earth has much potential. Also, Ellis revealed that the alternative Earth knew about how to go from universe to universe.

I will say that I can’t tell if it was Shipwright who hit eject or another crewmember. Hester’s art in that scene seemed sloppy on character design. I tried to use the coloring to tell who was who, and I couldn’t figure it out even then.

As the pieces come together, I’m less interested in this story. There was sabotage. There is a world that doesn’t want to be invaded because Shipwright’s Earth has destroyed itself with climate change. (Side rant: people who talk about leaving Earth due to climate change never understand how without rules and regulations, we’re just going to destroy another planet.)

Isham is a pretty great character. She’s certainly one of the more coherent people in the alternative universe. Or perhaps, she’s highly invested in getting information from Shipwright.

I did enjoy how Ellis’ juxtaposed their technology. One Earth has part of the equation and the other has the other part. Only together, can they really safely skip around the fabric of the universe.

But there’s so much danger that we finally find out Shipwright’s mission was sabotaged. I always hope that Hester’s art enhances understanding, but instead, it often makes the world more confusing. Maybe that’s the point.

This was a satisfying ending to a somewhat unsatisfying story. While there are many gaps, plot holes, and stuff that lacks cohesion, this last issue does wrap up our mystery and some larger issues nicely. I was a bit confused about people who said the ending left them bewildered as I thought this issue was the one that made the most sense. (It just didn’t help that it came out almost a year after issue #5. This is, for once, not me taking a zillion years to read something.)

While Hester’s art hasn’t been my favorite. His lines are rough and craggy. His faces are sometimes only half-realized. I did really enjoy the art in this issue. The pencils, inks, and color work so well. There’s one scene where Shipwright’s feet slide through to another part of a panel in two places onto a scene with the face of another character, foreshadowing that character’s death four pages later. The layouts in this entire issue do more for movement than the scripted words.

One clarification that Ellis made was about Shipwright’s personal apporter — a short distance, personal transportation device. I must’ve either missed this previously, or it wasn’t clear it was a device, not just something wacky about this parallel earth.

While I can see how everything on parallel earth was supposed to be a metaphor for Shipwright’s mystery of who the saboteur was and if he was ever going back and who he was, it got messy.

I did love what happened to the saboteur and the choices that Shipwright makes in the end both surprised me and very much satisfied me for the bits that Ellis does give us here. I only wished the rest of the book had been as good.