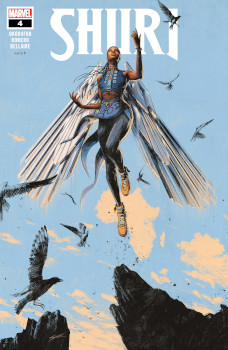 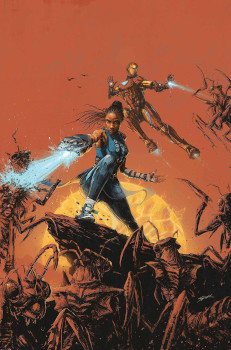 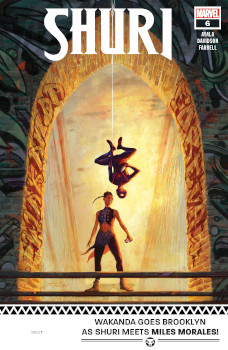 So Shuri’s flirty guy is Tony Stark? I guess there wouldn’t be too many people in the entire Marvelverse who Muti could be. I was worried for a bit that it would be a villain under disguise (too many plots do this), but I don’t know what to think of Tony. Of course, I’m very glad that Shuri knew exactly who it was. [Spoiler: totally wrong about this, it was not Tony, but the book was confusing.]

I hope we’ll learn more about why Shuri doesn’t have her ancestor powers after being in space and in a Groot brain.

There’s a lot of posturing by Ramonda in this issue. Not only is it clear she knows where all the bodies are buried, but Shuri’s been kept out of a lot of the ruling of Wakanda. I don’t know how much I buy of the latter. It does make this world easier to slide into from Shuri’s point-of-view because we readers are with her on not knowing about secret councils both of women and of other African leaders.

I’m always a fan of pushing politics in a way that reflects how we all live on this planet together. Unfortunately, I think there’s a flaw where it’s always off-world alien threats that bring people together finally. This is a flaw in our collective imaginations, not necessarily in Okorafor’s storytelling.

It would also make no sense for a Wakanda that has shown the world who they are to not be part of some African nations council.

This mysterious guy is not Tony Stark. No, Shuri’s mysterious Muti is still mysterious, but he/they helped get the word to the all people to stay safe and away from the black hole.

The entire entrance and the battle with Moses Magnum seemed ridiculous and pointless. It threw off this issue’s pacing, and I still don’t understand Shuri’s entire emotional arc here. Unless, she was always going to take her brother’s mantel and become the Black Panther and Wakandan leader again.

I have no doubt all this science, especially the black holes, somehow works. Okorafor is known for this type of sci-fi.

I did love that Mansa wants to become a Dora Milaje, and this is how they distract her mind from thinking about the bug. Of course, she’s going to have to think about it when Shuri figures out how to destroy it.

The moment where Shuri become Black Panther again and shows her African pride was tip-top form from this team up of Okorafor, Romero, Bellaire, and Sabino. Just wished I found the rest of this book that good.

This is such an odd choice to have Ayala come in and write a single issue of Shuri. Like was this the plan? Will she write the next issue? Or was Okorafor booked and Marvel thought they needed to put out a book once a month? There’s differences between a book people follow and a need for a subscription.

In addition to the writer swap, Davidson steps in for the art. His art is inconsistent, and I’m not sure what is happening to Miles when he’s in Spider-Man costume. His body oddly stretchs out — like a spider’s — with extremely long legs. This entire black hole situation doesn’t make for a clear situation.

It seems out-of-left-field that Ramonda would be okay with sending Shuri to Brooklyn and letting her hang there for a while. They have multiple crisises at home and a power vacuum. Considering how protective Ramonda is of the royal family and their power, this whole allowance is out-of-character. She’d be yelling at Shuri to get her butt back to Wakanda.

Not sure what to make of this kid villain and this other guy. We’ll see.

I do appreciate how both Miles and Kamala are excited to meet Shuri. It fits for both their characterizations well, and I’m excited to see more of Kamala in the next issue.