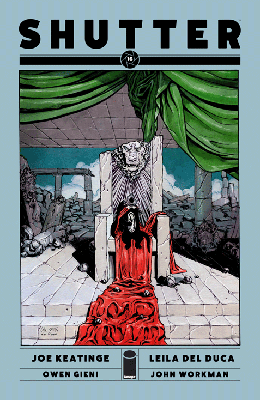 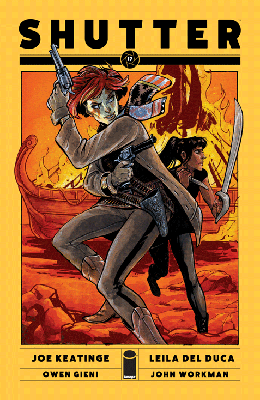 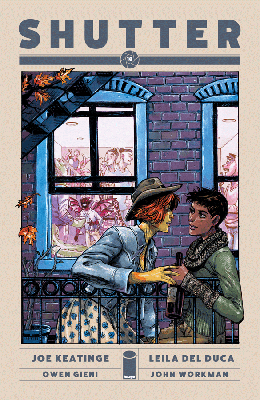 This issue could be described as Cassius basically destroys an entire kingdom. I guess Nero was very right about their kingdom being forced into having new ideas.

Yeah, either Shaw’s going to be banished forever or his mother will make him stay as heir to the kingdom out of punishment. Of course, she bluffed about killing Chris. Though maybe she shouldn’t have done such a good job at it.

Huckleberry and Aline’s plan to bring in Harrington as a decoy was pretty good. Though you’d think for those who lived in such a fantasy world that a walking, talking skeleton wouldn’t be surprising. Though Leonis is a segregated population.

I suspect that Kate may end up having to save them all.

My soul is utterly ripped out. Cassius! Cat Ferris’ drawing and the back cover only served to rip it out more.

I continue to love Del Duca’s art. If there was a lesser artists on this book, I might not be reading it.

When Keatinge said he almost killed Alarm Cat, but then didn’t, in issue 3, it really pointed out the weakness in this book. Plotting and planning. I totally get changing some of your writing as you go, and I completely sympathize with the real struggle of plots and ongoing, serialized media. They are hard to make an easy cohesive plot work together.

In other comments, Madam Huckleberry and Kate definitely still have some feelings. I’m glad to see Kate brought together with all the characters and all her allies, especially Aline.

Chris is going to have some issues to deal with.

I’m disappointed that the entire scene with Kate announcing that she knows everything and they’re going to end the world because of what she knows. It’s too vague. There’s been all this build up to 17 issues, but yet, we the reader really don’t get any clues. And unfortunately with the plotting and pacing issues, it comes off as if Keatinge doesn’t know what’s happening here.

I’d hoped this issue would be the reveal about more of Kate’s family, but we’re rather left to piece the different storylines together. Basically Kate’s mother and her father’s families have gone after each other for centuries and manipulated the growth of different cultures. The biggest issue I have with this approach is that it makes no sense how the planet could survive that much humanoid biodiversity without intervention, but it’s not seemingly what we’re addressing here. We also haven’t seen any interbreeding (which we can look to our own humanoid genetics and see this) — though there’s some suggestion that not all Christopher’s children are 100% human.

As much as I do love Huckleberry and adored seeing the span of her and Kate’s romance, I wanted more information about the main storyline. Or a more distinct story. What I find most interesting is that while both stories barely had any text, the Huckleberry and Kate romance conveyed so much more. Big props to Del Duca for her incredible pencils and merging the two scenes together.

This issue also gives an extreme in Kate’s head focus. Which is why she thinks all about her and Huckleberry instead of full focus on her PowerPoint. (How much do I adore Sandy, the dog who does PowerPoint? So much.)

Cassius lives! Only little Christopher is going to be happy about that.