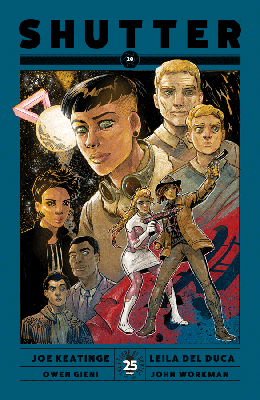 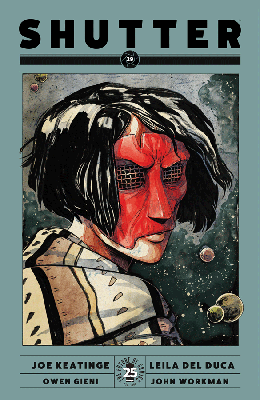 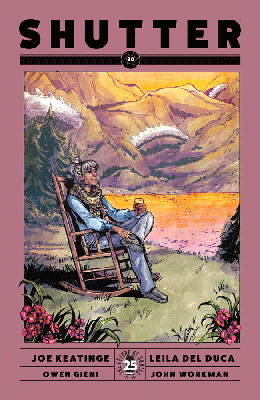 This issue has a lot of heart is nothing else. And perhaps, here we see Kate get sentimental in a way she really has not for the rest of the book. Yes, she lets her father get away with everything because she’s glad he’s alive. Kate even lets her mother escape. But here, she seems to have more affection for her “stuff” than her siblings or Huckleberry and Aline.

While we, the audience, is primed to love Cassius/Alarm Cat from issue #1, I’m not entirely convinced he’s actually her friend. At least, Kate has not treated him like her friend for this entire book. She’s treated him like an inconvenience, or at worse, a servant. Kate’s put him on babysitting duty with Christopher Jr. She’s left him behind, and she wasn’t overly worried when his head blew up.

I’m not sure how I feel about Cassius being damaged by coffee being the reason that he’s different from other Alarm Cats. Like he had to have something malfunction. Not to mention, all Kate’s fond memories of him were from before the coffee spill.

The coffee spill only gave Kate the knowledge of which part of Cassius to save as she killed him and let the jellyfish universe creator creature go.

As much as we readers are suckers for our emotional bond with Cassius, I don’t believe Kate just didn’t love her fancy stuff she was used to being around.

I’m a mix of feelings on these wrap-up and flash forward to people’s futures types of issues (or TV episodes.) I also felt influenced by Keatinge’s note in the back about how he’d had these endings plotted out for these characters far in advance. Maybe, but perhaps the main plot ending really wasn’t.

It makes sense that Kate would have a daughter to go on adventures with.

I don’t like that Cassius did die. Though I do agree that resetting him would also be akin to death. He’s correct that Christopher Jr was really the only one who loved Cassius the way Cassius loved and took care of others.

Aline’s death seemed needless. She was the best of them.

A lot of the other timelines felt a little meh. They didn’t move me either way. I didn’t care that much.

Christopher Sr is another character out there we haven’t seen. I’m glad that someone got Harrington out of the yard.

My question is answered about how planned this comic book was by Keatinge. He wrote the first issue and then he wrote the last three pages. Then he figured out how to get from point A to point Z on the fly.

Of course, Christopher Sr and Ranji basically only cared about their own lineage in the end. Though one has to wonder why they didn’t clean up those dead bodies earlier. It’s not like they’d be worried about polluting on the moon.

The surrealist aspects of this book never really took for me. Prospero as the machine to keep the world alive also never took for me. There were not enough threads there. There were too many “secrets” kept from the reader. And still even in this issue, there were times when Keatinge continued to be too coy.

Christopher Sr is the biggest ass. He cared only for Kate apparently of all his like 12 billion kids. I guess that why he told her all those years that it was just the two of them.

So Kate’s whole point of her life was to be a better parent to her daughter than her parents were to her? So then they could destroy the universe together? Okay…

That’s really all I have for this series.