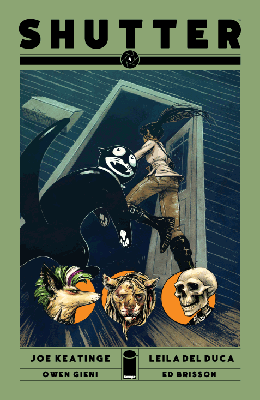 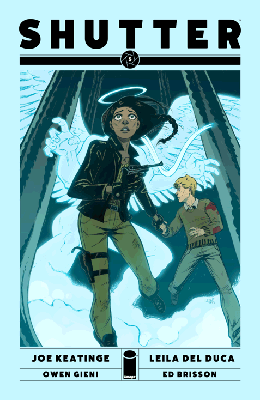 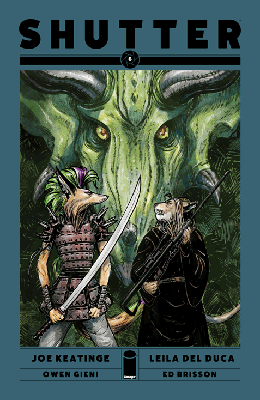 I’m still finding the mystical mayhem of the various people and creatures after Kate to be distracting from what I actually care about. That said, I did enjoy the story of Reginald Harrington and how he became employed as a skeleton to Kate’s family.

I’m thinking that there’s more to the General than she’s telling. Especially since she send Harold and all those other creatures after Kate. They did try to trap her in a crystal.

Alarm Cat is definitely supposed to be the audience in this story.

Now it can’t be Kate’s tiny brother who’s after her. Who looks oddly exactly like their dad. (Did he reincarnate himself?)

Well, I very much called at least the tiny brother, Chris Kristopher, being named at his father. And mysteriously being born after Kate thought her father was dead. Which spoiler: she reveals that after her father was impaled and on his way to certain monster death, Kate shot him to give him an easier death.

Seems that Kate has less to be guilty about than she thinks she does. But now we know why she quit adventuring all those years.

The General has called the cavalry to haul back in Chris and Kate. Of course, sounds like a bad bargain too.

Love Kate already being an overprotective sister. She’s already angry about them not raising her brother right. Adored their conversation about dinosaurs. Alarm Cat also continues to rock my world.

I do think that Kate needs to take a deep breath with each reveal and should’ve asked the General more questions.

I’m kind of unsure why Keatinge keeps building up characters like Ekland and Shaw, if he’s only going to kill them off. I do think that you should always try to connect readers somewhat into liking — or give two-dimensions to — the villains. However, seems like a waste when there’s so much about this world, about Kate, and about her family that we have yet to explore.

Poor Chris. He may know how to use a shotgun, but he didn’t want to kill Shaw. And he sure as hell didn’t want to see Kate kill a dinosaur! Good thing Alarm Cat has a secret stash of candy.

I am excited to finally meet Kate’s sister. Who apparently wants to kill all their other siblings and not Kate anymore. Maybe she figures that if Kate and Chris are goodies then they won’t really be in her way. Or won’t care as much if she takes control of their father’s estate or something.