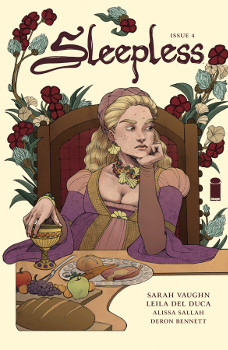 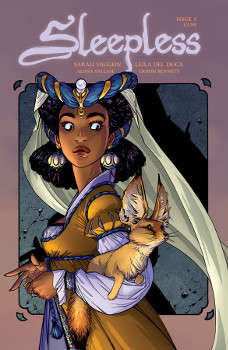 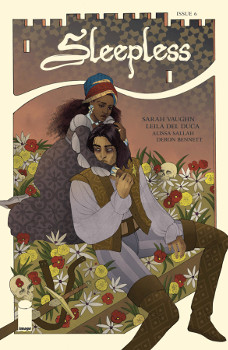 Now we know through Sir Gert what happens to the Sleepless when they run out of steam. They go to sleep until they die a true death. I still want to know more about this process and this magic. I wonder what kind of cost there is for the one that they are bound to.

Oh, Cyrenic, he either had a girlfriend before taking the Sleepless vow, or he really does wish that Poppy was his lady, not his charge (or his boss, or his master depending how you view this arrangement).

Of course, Gert had a big revelation about who was after Poppy just as he died. Dramatic!

Bini is the best fennec fox. He takes care of Poppy when she’s not careful enough. Putting poison on her plate is quite the trick. I wondered about how one piece of goose flesh would get poisoned without poisoning everything else. I appreciated that it was Poppy herself who figured out what was going on and how to avoid eating the poison without seeming too suspicious or rude for not eating. This is some Jane Austen moves right here.

I really adored the art in this issue. Del Duca’s hitting her stride with knowing these characters and the types of details that bring them to life. Plus, she has to keep up with all the walking and talking that Vaughn writes — it’s like an Aaron Sorkin medieval drama in comic book form — and all those long hallways of the castle. Plus, the flashbacks. I hope someday they release a castle map as you know there is one.

I do love this gorgeous purple and gold cover with the fennec fox right in Poppy’s arms. These covers definitely always draw me to pick up this book and continue reading it. (Along with, of course, my fondness for the story itself and the inside art.)

I am thankful that we aren’t spending a ton of time figuring out that it was Lord Helder who is trying to kill Poppy and who accidentally killed the other woman.

We get a lot of insights into the microworlds of the court here. A lot of questions about the Sleepless are shown in Sir Gert’s death. Or his sleep until death. We see a full cycle of Sleepless in him. However, I always thought Cyrenic would last longer — not just because he’s a central character — but also because Sir Gert was much older than him. Though perhaps this just means Gert was older when he took up service and Cyrenic was younger.

It is interesting to see how the King has decided against using the Sleepless and how little he trusts magics. I assume this is just another reason to dislike Poppy.

I did really love the banter between Poppy and Princess Rellen. Rellen’s bracelet certainly is both a charm and a curse for seeing the truth. But it also makes these two young woman allies. I hope they continue to build on this friendship and trust in each other. This would make the book even brighter. Especially since neither of them really want to be royalty, but do not have a choice.

Lord Otranto is correct that the King is just one disaster away from showing his true self. But aren’t all leaders (self-appointed or elected)?

That ending! I cannot wait to read more Sleepless.

While something had to be done about Cyrenic starting to lose his grip on reality, I did not expect this. It was a nice surprise that fit exactly within the world, just not something we knew could happen. Kind of curious why those like Sir Gert wouldn’t release the moment the Sleepless started to exhibit problems. I suppose that the long-term sleepless damage to your body would already be done, and you’d already shortened your life extensively.

Though Poppy’s going to have to learn how to defend herself. Especially after Lady Nnende’s vision of her and Cyrenic’s bones.

I do wonder why Poppy hasn’t tried to runaway. I suppose there would likely be a manhunt for her, and she may be imprisoned for trying to break the will of the King.

What is Lord Helder’s angle by trying to get Poppy to marry him? I almost don’t think he is the actual assassin as it seems a bit too easy. Princess Rellen being used for her truth abilities, but also not being allowed to ask actual questions of Lord Helder worked so well to show the place of women in this court. No one listens to them or takes them seriously. Patriarchy is the worst.

I loved Del Duca’s imagining of Lady Nnende’s rooms. It was in sharp contrast of the world of the rest of the palace, even Poppy’s quarters. And that scene with the kiss and Cyrenic falling into Poppy’s arms as she releases him, so beautiful.