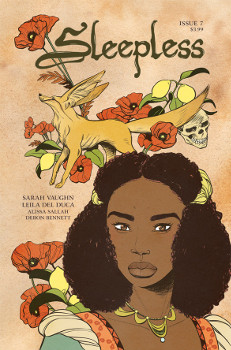 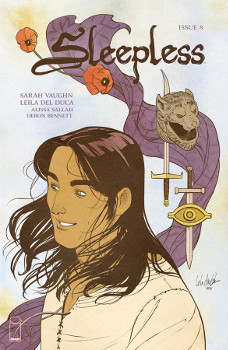 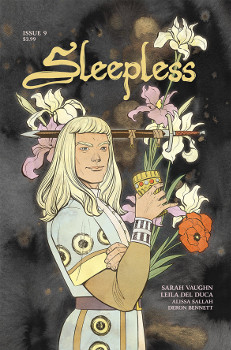 My biggest complaint here: there’s not enough in the story. I want more. I want to know everything that’s happened in the last year since Cyrenic went to sleep. I know it’s the Sleepless tradition, but keeping him in the catacombs was a bit creepy.

Of course, Poppy agrees to marry Lord Helder — who I’m still not convinced he was the one behind the assassination attempts on Poppy’s life — just as Cyrenic wakes up. It wouldn’t be a continuing book without some conflict.

Both Poppy and Rellen look slightly older and taller. Del Duca also places the women in their body language as closer confidants to each other. Oh, Rellen, the spots don’t go away for women as we age.

I do want to know more about this woman who is now guarding Poppy.

Was there ever any hope that Poppy would not marry Helder? No, Cyrenic was right about that. Even if we all kept secretly hoping the ceremony would stop. I don’t think the next issue will begin with anyone running up to break apart their hands.

I loved Vaughn exploring how the other Sleepless react to Cyrenic’s reawakening. (Though the only thing I could think about when Cyrenic gorged himself on all that food was how his stomach would respond to it, but also appreciating that Vaughn didn’t go there.) Of course, this revelation around Cyrenic’s release would turn the Sleepless’ identities on their heads. I’m both surprised and not about how no other Sleepless has been released before. I suppose they are, in general, a precious resource to those they serve.

Will this change how the King sees them?

Cyrenic’s joyous expression when Bini runs up to him was the best. Del Duca continues to be one of my favorite current comic book artists. Poppy’s dresses were stunning. Major kudos to Del Duca and Sallah.

This marriage doesn’t bode well for anyone, and I cannot wait to see what happens next. Somehow the gift from Poppy’s mother — a hairpin that aways knows west — will likely play a part. I imagine some running away may happen.

As predicted, Cyrenic and Poppy are running away. Things didn’t quite go down as I thought they would, but Poppy will be using that hairpin.

Bini! Oh, my heart, I guess I understand why having the fennec fox with them wouldn’t be the greatest or easiest move, but with no one to help her, Bini bit terrible Helder.

I guess I was very wrong about Helder and the assassination attempts. True, we find out he worked for someone else. His and Poppy first martial chat didn’t go the way he thought it would. I don’t know what delusions he harbored that she’d forgive him for multiple assassination attempts and then work with him to increase his court powers. I will admit to cheering when Poppy shoved him against the fireplace, and he slammed his face into it.

It was a useful device to have Helder explain why the King viewed Poppy as such a threat and how she probably could’ve gotten the throne for herself. Which is not what she’s interested in for her life.

Those were definitely Sleepless who Helder worked for. Which means they are even more in trouble than previously thought. Or perhaps they all knew Cyrenic would stop any of the attempts and that was the point. Though why would they blame Cyrenic for Hedler’s murder if that was their original angle.

Of course, this castle has secret passageways that no one accounted for.