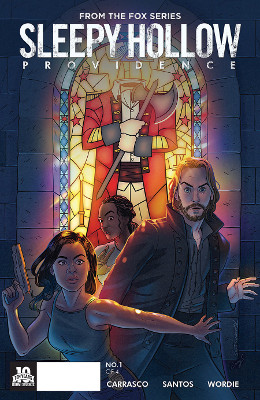 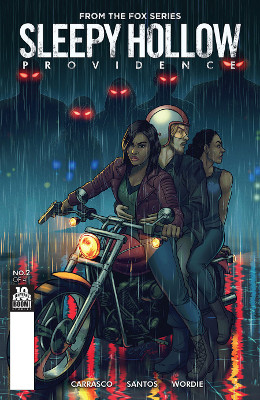 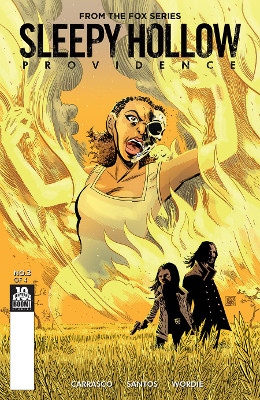 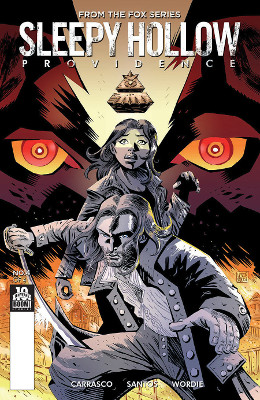 I really wanted to just sit back and enjoy this book. Sleepy Hollow is the type of show that may be imperfect, but is fun and ridiculous. After reading up on the terribly taught history in US schools, I don’t find the show’s take on history actually anymore silly. I hear some history folks hate it, but hey, there’s also demons and monsters. Unfortunately, this plot was messy and weak. It doesn’t seem to be driving any development of the characters.

The story, so far, revolves around Jenny going after an artifact called The Spike and meeting its protector, Emily, an Amish woman. Then, of course, Abbie and Ichabod get involved — Emily easily identifies them as Witnesses, instantly in on all their secrets and having their trust — and they go on a mission for The Spike.

Unluckily for them, a band of demon bikers is also after The Spike. The villains are very paper thin. They fall into biker stereotypes and apparently are just violent because demons. There is no reason given why they’d want The Spike, and our gang of heroes winds up in a firefight with them by the end of the issue.

Santos’ art is all over-the-board for me. I really like his unique style and how it lends to backgrounds and magic. However, when it comes to humans, it seriously lacks. Drawing people based on real people is a balance; I don’t expect photorealism. But that scene with Ichabod in the shower was horrifying. Just horrifying. I blame both writer and artist for it.

Oh, this book continues to just be random. They aren’t demons! They are fairies! Complete with a lecture from Ichabod about how fairies and pixies are different and how we always screw them up. I’m actually surprised there’s not more mocking of the Welsh and their lack of vowels. I get that Ichabod can be pompous, but Carrasco makes him a tad too much.

The art continues to be lackluster. Super lackluster, especially since I watched the TV show only hours before writing this review.

There is pretty much nothing to write home about here because of the lack of plot and too much exposition about everything. Especially given to the fairies. Who somehow easily find Abbie’s and Ichabod’s homes. And then there’s a car chase that only makes half-sense.

The flashback Wild Hunt appeared to be more like foxes and bears than Fairies and much cuter despite the gore. Santos really likes drawing a shirtless Ichabod.

Also, wow, we have some basic Amish 101 here. Like awkward questions, even if Ichabod would have an entirely different perspective considering they continue to use the technology that was the best in his time.

Oh, Emily. Carrasco did not just let Emily come out and express her love for Sarah. Then immediately kill her. Dead lesbian tropes. They are worst. 🙁 And I was even enjoying Emily bonding with Jenny, not to mention getting lesbians after Sleepy Hollow‘s complete lack of queer characters.

This book redeems itself slightly because Sarah uses the Spike in order to resurrect Emily. Of course, we don’t see them run off to their happily ever after. And in Sleepy Hollow, magic always has consequences. Perhaps it will be that Emily must guard it forever and watch Sarah grow old and die.

The use of other artifacts from the show to turn the Fairies against each other worked well. But also made me frustrated trying to remember it.

When they first brought up that iron destroys Fairies, I wondered about The Spike and it being iron. Though the fact that it could grant eternal life (or at least bring back someone from the dead) does show power. Again, there was a lot of exposition without much plotting.

Also, where is there a rooftop deck for Jenny, Abbie, and Ichabod to just lounge around on and feel good about themselves?