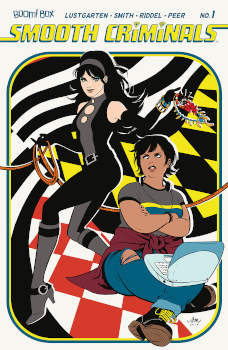 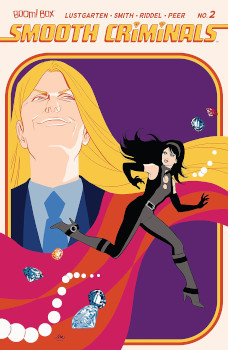 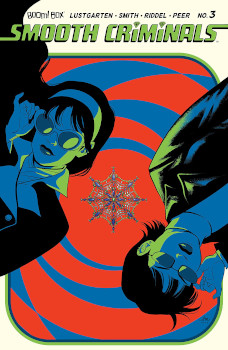 This was more like 3.5 stars. It didn’t capture me completely, but I’m not turned off by it either. It was entertaining enough to entertain more of it. This creator/writer duo’s last book, Misfit City, was one I was excited for, loved lots of elements of it, but ultimately, the ending and pacing missed the mark for me. They know how to create the world and an exciting plot, which here we are.

Oh, Brenda, to be saddled in life with that name. Killa-B is so much better. Oh, the late 90s when we thought the internet was going to be an amazing world-saving thing, not just bring us Nazis.

Mia Corsair, I assume, is a sexy jewel thief’s alias name because it sounds like it’s from a Bond film.

The premise is a bit bizarre, but that’s pretty standard Lustgarten and Smith. They always mix a bit of magical realism into their stories. The most unrealistic piece being that the US government accurately kept track of that status chamber Mia was in. At least I assume those are spooks at the end.

Of course, Killa-B lives at home. Of course, she has an annoying little brother. Though if I were him, I’d also want to know why my sister had a hottie passed out on her bed.

The pocket calculator joke was pretty funny. Especially since Mia’s outfit would never have pockets big enough for a calculator, much less laptop, to fit inside.

I’m going to assume this series is limited. And with that in mind, this issue was very clever. Mia and Killa-B quickly find out all the obstacles in this fight before them, and so do we. Lustgarten and Smith do a fabulous job at working them into the story.

I’m glad we didn’t mess around realizing that it was a cryo-machine, not a time machine, that brought Mia into the future. We aren’t going to worry about sending her back because there is no backward. She cannot go back to the 1960s. But also, except for mystery solving, getting the machine back is no longer a priority in the story. Fewer plot threads to tie up later.

The second part I appreciated was how Carsten Friese, his daughter and heir Astrid, and her finance and Mia’s arch-nemesis, Hatch Leonard are woven into the story. It’s all the details that Kill-B ignores every day at her school. All the history that she’d have no way to discovering without Mia.

I’m betting Hatch was also cryo-frozen, and he escaped a little ahead of Mia. Or at least Riddel isn’t drawing him like an elderly man.

Overall, Riddel’s art remains fun and fresh. My only slight complaint is that when Mia detects Hatch, the coloring is red and she and Astrid have very similar faces. When I first read it, I kind of thought Astrid was sensing Mia, her arch-nemesis.

Can’t wait for some heist fun. Also, the ultimate reveal that Hatch is only engaged to Astrid to steal from her.

I’m not sure exactly what the point of B and Mia breaking into the gala was. Just recon? Especially since they made a huge scene, and no doubt got their faces on security cameras and in the minds of security guards. Not to mention Hatch realizing that Mia was back from her cryo-freeze. But seriously, her hair was way too ’60s.

I adored B’s butch outfit and Mia not saying a word about it, which is rather something considering she’s from the 1960s.

Them going to visit Dart in the nursing home was sad. I did wish Mia had more reflection about where her own life could’ve been if she hadn’t been frozen. There was a missed emotional beat. I hope with Mia’s mother incoming that we won’t be let down on emotions there.

My favorite quip was around B explaining to Mia what the word “bling” meant. It was one of those nice layers of time.

Unfortunately, I didn’t find the bling that bling-y. The illustration and the colors didn’t push this jewelry off the page in any way.