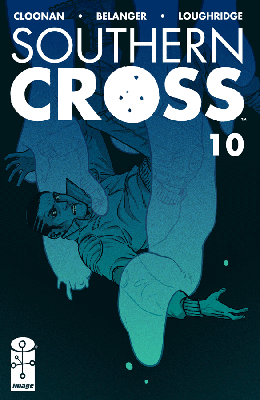 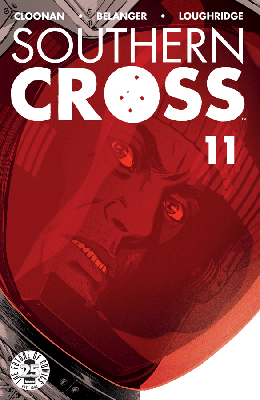 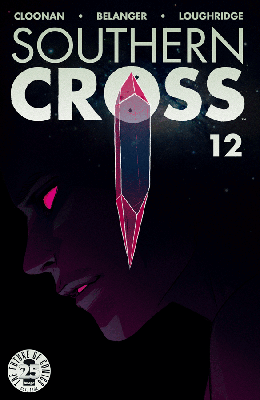 This was almost a four, but the transitions in the story were just too jerky. We’re having to be introduced to too many new characters and scenarios. Honestly, Cloonan just should’ve eliminated all the cutback scenes with Forsythe. We already know they cannot go back. We already know Forsythe is an out-of-control middle manager. It’s not like even Hazel cares to sort out that mess.

We have bigger fish to fry. Namely the glowing artifact that brings back the dead and makes them talk.

Kyril was at least smart enough to cover the artifact up. And also tell them to run when Holt came back to life. (That was Holt, right? I get that they need these environment suites. But seriously, they make it hard as hell to tell people apart. Especially when two of them have hockey-style masks. This is another reason for the three rating.)

I didn’t peg the nurse for Carter’s killer. I did figure it was supposed to be Kyril.

Seems like Cloonan could’ve introduced Sinjin Swan with him just being annoyed at having to leave his swank home. No more Forsythe.

Okay, we needed to go back to Romulus to get to Amber’s body.

I still think there needs to be zero Forsythe. Of course, he’s basically been abandoned by his men, and the miners are all ready to leave. He’s the most worthless person. No doubt to be turned into some kind of literal monster in the future.

Seems weird that Sinjin, who seems to be some kind of company president / ruler, would name Alex in his speech as trouble and blame her for the Southern Cross’ disappearance. But I suppose this is what an evil villain does. And just who was he addressing? The people? The board and shareholders?

Extra convenient that they ran into Maxwell, Alex’s and Amber’s dad. Poor Hazel has to be the one to tell him that not one, but both his daughters are dead. He seems less than fazed by Rom’s head in Hazel’s bag.

The nurse still has not been addressed by a name, and I don’t recall if she got a name in issue seven.

It’s been clear since issue seven that Kyril has been repressing something. Now Alex will release that knowledge. But you can only do it naked.

This issue propelled me to want to read the next one. So this is a good sign. I do also think we’ll have some kind of resolution to the continuing mystery of what happened and what’s this gateway to.

I’m not sure this is very satisfying as an ending for volume 2. But it’s certainly more satisfying than the ending of volume 1 where you are left majorly hanging there with Alex, the main character, dead (kind of).

So clearly the Seven Hand know that these ghost aliens are coming for humanity, and they want to have all the artifacts in order to protect themselves. Or they want to use them as leverage because they will be extremely valuable? Was Sinjin addressing the Seven Hand in the last issue?

Forsythe turned into the creepy monster he always was. At least Hazel got to destroy him.

What’s-her-face still didn’t have a mention of her name. Of course, she wasn’t in the room when Kyril disappears with Amber-Alex. Maxwell calling Kyril “pretty boy” was hilarious after his nude scene.

There’s a lot of running back and forth in this book. I do hope that now we’ve hit the Southern Cross, almost literally, there can be resolution in the third arc.