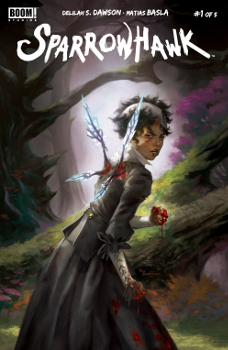 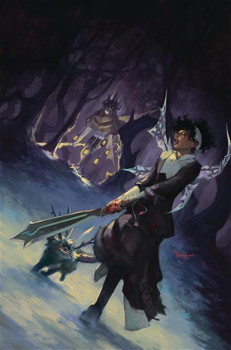 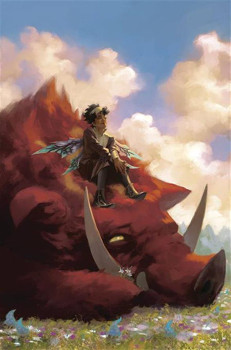 I haven’t read a fantasy comic book set in the past in a while, and I’m excited for this. I very much loved the last Dawson book I read (LadyCastle). However, I am missing her sense of humor here as SparrowHawk so far is a very no-nonsense book. Yes, even with butter fairies.

Artemisia seems like a perfectly setup heroine. Her stepmom doesn’t think she’s capable as she was born due to her father’s philandering and she’s black. But her stepmom’s threats also motivate her as mom’s ready to ship her little sister Caroline off to be married to a 70-year-old unless Artemisia can get herself a rich husband.

Crispin the jackalope fairy is, of course, my favorite. Except when he takes Artemisia’s happy memory, he doesn’t seem to be that much of a trickster spirit, even if he’s not putting himself in harm’s way any time soon.

There has to be some upcoming consequences for Artemisia in her killing. And not just that in her soul, but literally as she’s transforming into a faerie. I assume she’ll basically need to be a full faerie in order to escape this land and save her family from the Queen who is impersonating her.

I do hope for some of Dawson’s humor when it comes to the Queen dealing with Artemisia’s would-be suitors.

I don’t know if they accidentally left Nalty off the register last issue, or they joined the team this issue, but this was a good call. Faerie is color-filled, as opposed to colorful, and having a colorist to take on the task benefits this book greatly. Nalty does a wonderful job.

We discover that it’s not just a single memory Crispin took, but Art’s entire recollection of her sister Caroline. Which means while Art has a pull to get back to the human world — she also does not remember the true reason she came here. I bet that Crispin’s long game is getting Art to stay and become powerful so they can rule the land with the Queen gone. Or maybe it’s just to kill the Queen, who essentially got bored of Crispin a while ago.

I really like the introduction of Warren, who can play the good angel to Crispin’s bad angel. It also makes the exposition of the rules of Faerie more interesting to see two characters debate them, instead of having us told them. Art does need to ask more questions though.

Warren must have some kind of powers in order to see — and recreate — the memory that Crispin snagged from Art. I makes me wonder if he could give it back to her. Especially when Warren throws back some of his potential power after Art decides not to kill Warren and Crispin’s still threatening him.

I hope Dawson continues to use Art’s perspective as a child of a colonizer and someone who was taken away from her colonized mother. The text implies that she’s very likely the child of rape and/or that her mother was killed to continue her father’s dominance. This makes Art’s approach to Faerie more nuanced, unlike so many stories of white kids who gleefully become colonizers — or seemingly have simple good/evil paths to glory.

Warren’s comment about how killing the monster that eats Brownies makes me think we’re going to have a problem with Brownie overpopulation in the future.

My guess is that when Art finally kills the Queen, it will de-fairy her or something, and she’ll have to deal with the consequences of her actions then. Because I don’t see her killing streak stopping any time soon, especially since Warren has left them. Even if Crispin says he’ll be back.

Basla’s art continues to be one of my favorite things about this book, and I feel like I’ve been neglectful in mentioning that. They know how to draw a faerie world that’s otherworldly, similar enough to our world, and cruel-looking. The landscape doesn’t look like it tries to even pretend to be a nice place. There are angles everywhere, and Nalty’s color choices further reinforce the not-rightness of it.

I don’t know why no one’s figured out how to kill the Wild Hunt the way that Art eliminated them. I guess they are all stuck in faerie due to eating the food… Crispin’s comments about how you cannot just change someone’s nature due to asking them to seemed a little too ominous, and not just about Warren also going to count the grains of salt and sugar.

Also, if Art is hungry, why didn’t she eat any of the sugar cubes in her pockets!