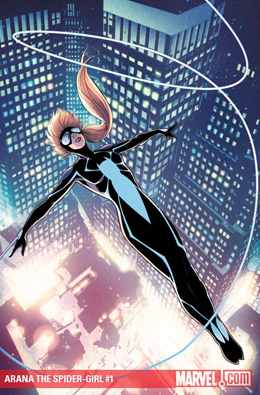 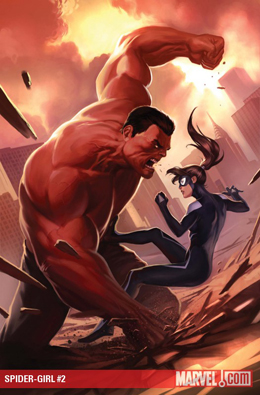 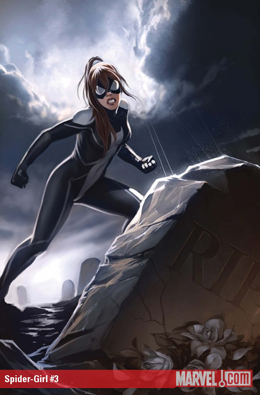 This was a pitch perfect issue. I’d read a bit about Anya before in Ms. Marvel, but this really brought her to life without having to know all her backstory. And Tobin masterfully worked in her backstory without bogging down his tale. Perfect.

I loved Anya starting off her day chasing down the speedster/YouTube fame seeker Screwball. Their entire battle did an excellent job at setting the tone for the book. I feel like this title really steps up to the take the place of those who still long for the youthful tales of Peter Parker beating up his equally teenaged villains.

Additionally, Anya’s relationship with her father Gil was wonderful. I love how he’s her best friend and part of her inspiration to be brave. It’s awesome to see a supportive parent in her life. I also like how Gil wants Sue to be an hero mentor for Anya. So many stories lack female mentors for female superheros, and I’m happy to see Sue do so. Even if Sue may or may not know that Anya is Spider-Girl right now. Of course, Sue as a ‘how do I make friends?’ mentor was equally awesome.

I adored Anya saving cats, stopping car buglers, and recovering stolen jewels. All petty crimes, but someone’s got to watch out for the people while other major crimes are happening.

I hope that Gil getting injured by Red Hulk is only going to serve as a way to tell the Fantastic Four about Anya as Spider-Girl, and that Gil will continue to be in the comic. We don’t need any more dead parents in comic books, thanks.

Likewise, the backup story about Anya’s first visit to the Baxter building was adorable. I loved how it showed that even as a young girl she was brave.

The Thing stealing the idea of a Star Trek-like transporter to scare people about the elevator was too hilarious. Of course, he would. Same with Anya saving both the Thing and Reed from the tentacle sea monster and then them making her swear not to tell Sue. And Sue knowing that something was up. Because something is always up.

Again, the possible mentorship of Sue toward Anya is awesome. I love the sweet tone as Sue turns Anya’s legs invisible.

Plus, the story about how Gil met the Fantastic Four really highlights what he’s taught his daughter by his own example.

I’m really upset that Gil’s dead. I thought for sure that it would be a fake-out. That this issue, he would be in the hospital, injured but alive. I don’t think there needs to be another dead parent in superhero comics.

That said, I do think that Tobin appropriately did work through Anya’s grief. Everything she experienced worked incredibly well and felt real. She rages after the Red Hulk. Anya then saves another person’s father because that’s what heroes do. I just wish that Gil hadn’t died.

I loved Rikki and Rocky’s inclusion into the story, especially as they support Anya. I’m glad that Tobin didn’t write her all alone. However, the funeral scene made me wonder where the Fantastic Four were. Since Sue was supposed to be kind of mentoring Anya. It seems like they should’ve cared more.

Rocky and Anya’s connection at the end of the book was really sweet. Only to be ruined by the creep spying on her.

I liked about half of this book, between both the art and the storyline. While I’m still not thrilled with Gil’s death — and even less thrilled with the revelation that he would’ve died from poison had the building not collapsed on him — I do think that Tobin does a good job at displaying the grief of a teenager girl.

I also really love the close friendships Anya has with Rikki and Rocky. It’s so important for women to be shown as being actual friends with other women, especially at a time like this. It’s also great to see Spider-Girl and Nomad out fighting together.

I loved the framing of this story, and I was not, until the very last pages, expecting that there was a real audience to Anya’s storytelling: Sue Storm. But I love that layer of mentorship. Yeah, the whole scholarship fund so Anya doesn’t have to worry about bills is a little out there — and I can’t help but wonder what kind of real dirt Gil had on the Fantastic Four — but at least Tobin is seemingly worried about what Anya will do without her father’s income.

The Red Hulk confronting Anya was not my favorite thing. He seemed to only be doing so, not to tell Anya that her father died a hero, but to absolve himself of his own guilt over Gil’s death. Spider-Girl blames herself for her father’s death, when there’s no way it was her fault, compared to the Red Hulk, who was at least partically responsible, who does not seem guilty. I just think that if we’re trying to make the Red Hulk a good guy, then perhaps he should feel a little guilt. Just saying.

So her neighbor is the creepy spy guy?