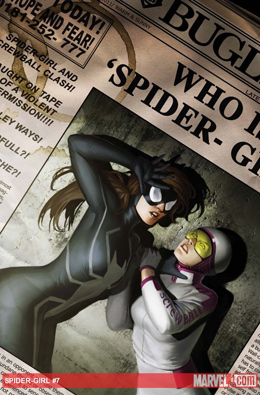 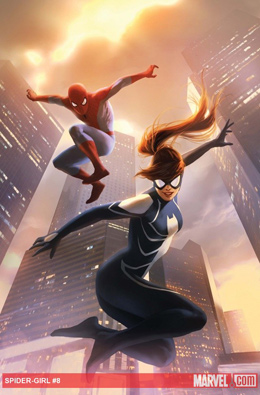 I really enjoy this issue: from Spider-Girl kicking butt with Spider-Man to her taking Rocky to the Baxter Building. I love how Anya builds friendships all around her, and how that her father may be dead, but that doesn’t mean there’s no one who cares about her.

I’d wondered just when Raven was going to come after Rocky. Given the peeping Tom neighbor and the obviousness of Anya’s tweeting, it was bound to happen sooner or later.

Tobin did a great job at pairing Anya and Peter up and comparing and contrasting their fighting styles. He made Spider-Man his usual joking self without having him go too overboard or sound condescending to Anya. I like this superhero team-up. And I like that it’s an interesting battle without having to take down some A-list baddies. Plus, the art lends itself to the fun and feel of the story really well.

I feel much better that her creepy neighbor Kurt Godwin turned out to be the evil guy from Raven. It would’ve been far more disturbing just to have a random stalker guy. Far more realistic, but I’m not sure that would’ve worked with the tone of the book.

I love that Anya has her powers back. Even if I know it just has to do with the Spider-Island plot. Maybe she’ll get to keep them after this is all said and done? That would be awesome.

My very favorite part of this story was the ending. Rocky realizing and knowing that Anya was Spider-Girl all along was great. (I *knew* Anya’s tweets would get her caught by someone.) And I loved the acknowledgement that yes, Anya still really misses her father, but she also has a family — Rocky and Rocky’s father — that care about her. Awe. I’m rather sad that this book is ending; but I’ll be able to enjoy a little more about Anya in the crossover with Spider-Island. (Though we’ll see how confused I get.)