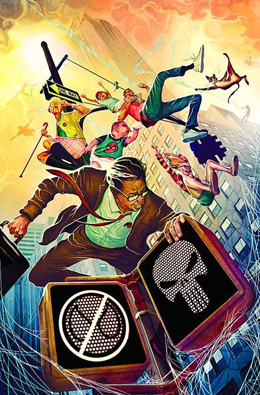 I did not like the art in this story. There wasn’t anything particularly bad about it; it just wasn’t my cup of tea and that made for a not stellar experience with the story. It was especially disappointing since I’ve seen some of Fiumara’s other art.

I am glad that they put the credits at the back because I wasn’t expecting a Punisher story. I might’ve been had they been earlier.

The villains were a little weak. Though I agree with the notion that ordinary jerks — which these would-be bank robbers were — given superpowers would think that the best use of them would be for committing crimes. Though Rucka used their spider-sense wonderfully here and also showed just what an unforgivable hardass the Punisher really is. Anyone else would’ve locked these losers up, but he kills them.

Out of all the stories, this one might’ve been my favorite. DeConnick writes a wonderful portrait of a mother, Jane Rathsom, who’s trying to take care of her children and the house as best as she can while her husband’s away.

The part at the beginning where she’s multi-tasking, talking to her husband while bringing groceries home and keeping an eye on her children, and her celery gets stolen is perfect. And the touch at the end where she fights the bad guy to leave the people on the street alone and gets her celery back was cute.

I liked the admittance that she’s not a perfect mom, and how when she has extra time due to superpowers, she then has greater responsibilities. DeConnick did a great job at pointing that out in a manner which seemed a bit fresher.

Chuck BB’s art was great. I liked this sense of color and how well it complimented his drawings. He did a great job at making the ordinary extraordinary.

And of course, Jane’s story ends with her children getting spidey powers of their own.

I liked what this story tried to do. I liked that it showed that people can cause problems without superpowers. That said, the story of the toddler Charlotte capturing the thieves in her home felt weak. Fiumara’s art was weird, and the people had odd proportions. The robbers wearing those plastic other people’s faces masks didn’t help.

Can we just have stories about super-powered animals all the time as drawn and written by Young? Please?

This was beyond adorable. I love the cat being both bad (stealing the fish) and then out to save NYC from Vemon pigeons. Win. Especially in that it was a dream. I like this idea that cats dream about being superheroes.

Of course, the ending with the spidey-powered boys doing what they’d normally do without superpowers and the cat going off to save the city was perfect. Perfectly adorable.