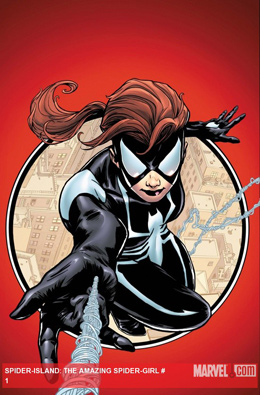 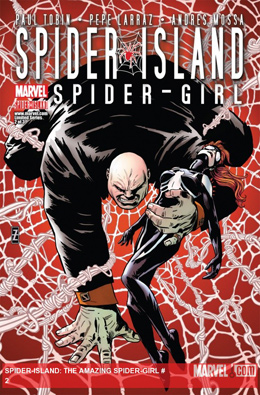 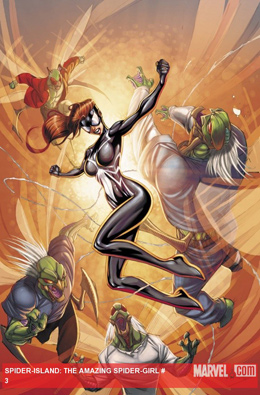 And the fight over black women’s hair continues in comic book as Larraz straightens Rocky’s hair. Why? Why does this have to impede my enjoyment over a book. I just don’t get it. (If you don’t know what I’m talking about: read more.)

Beyond that, Tobin continues his fun run of Spider-Girl here. (I don’t know why had to cancel it and not just slap a crossover blurb on the front for a few issues. Whatever.) I loved Anya revealing that she was also Arana, and Rocky then quizzing her if she was anyone else. Cute.

The Wasps coming after Anya and then the Hand coming to save her was pretty good. As was the fact that Anya was the only one trying to save the actual people who were getting in the way of the fighting.

Interesting that Kingpin wants her services and that he would hire the Hobgoblin to bring her in.

So here’s my thing, this needed to be part of the Spider-Girl title because so many of the nuanced relationships would be missed if you hadn’t read that title. But maybe I’m just a Scrooge in that I’d rather read a title than a huge crossover event and tend to stick to my titles (that are good) regardless of crossover events and just am sick of getting confused by things happening in comic books that I’ve spent a lot of my time reading and getting to know. It all goes back to ‘and the companies wonder why they have such a hard time attracting new readers…’

This seems like another middle-of-the-road entry. Though at least our colorist has realized that Anya is brown, not a tan white girl.

The Kingpin’s spider-powers just make him kind of creepy. Or ridiculous. More ridiculous?

Madame Web and her powers of prediction just seem to be all over this comic book. I wonder if she’s being positioned as a character that they might try to get her a title?

The fight with the Wasps was okay. I think Madame Web’s predictions might’ve come across too strongly as I was expecting Spider-Girl and Hobgoblin to get their butts kicked. And have Kingpin join them and further lose. Of course, it ended with Spider-Girl teaming up with Kingpin in a cohesive manner.

This miniseries really didn’t grab me, despite that I loved Tobin’s Spider-Girl series. Too short a run. Maybe it once again goes to show that you can’t dictate a type of content.

I’m sad for Anya that she didn’t get to keep her spider powers. And I don’t know why Rocky thinks that she’s going to be just a normal teenager given that Anya was Spider-Girl when she didn’t have powers too.

Again, I felt that Madame Web’s predictions were a bit too literal. And while it wouldn’t seem obvious to Anya that she was supposed to team up with the All-Mother and the rest of the Wasps, it was to the reader.

I did like that the Hobgoblin killed the All-Mother at the end and also that Anya turned down working for Kingpin.