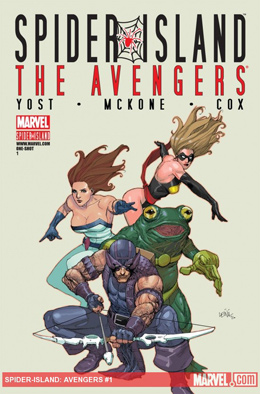 This story was not what I was expecting, but that’s not necessarily a bad thing. Sometimes I do think it’s good to have a side-story about just a fight. A battle that really doesn’t matter in the bigger plots.

Frog-Man was a pretty funny addition. I’m glad that we totally haven’t forgot about all the weird Avengers teams created under the Initiative. Hawkeye with spider-powers wasn’t as funny as Yost thought he was. It got a little much by the end. At some point, the gag stops being funny. I didn’t think that Yost knew what to do with Jessica and her certain brand of snark or Carol, except make the later a lust object for Frog-Man.

Overall, it wasn’t an impressive comic book, but it wasn’t bad. Seems like just another middle-of-the-road entry.