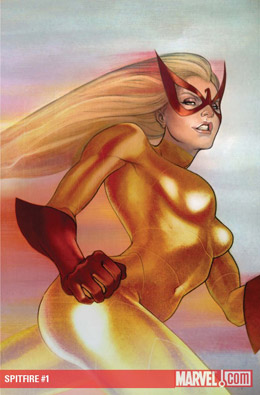 I didn’t read Captain Britain and MI: 13 so I don’t know the big history about Spitfire being turned into a vampire. Or a half-vampire like Blade. Or whatever. I also don’t have the emotional context of her and Blade’s blooming relationship. I have read other stuff with Jacqueline, mostly about her World War II adventures with the Invaders.

Lark Bertram-Hayes serves as a great foil for Jac and her change. Lark is what Jac could be. A bored society vampire with too much time on her hands and a memory that stretches back into history.

While I feel like Cornell has all the makings of a really good tale here, it falls short. And this could be because one issue did not seem long enough for this tale. Every time, Cornell gets into Jac’s head, she seems to skirt away from him. For a moment, there’s a brilliant insight and then it’s gone.

Spitfire’s exchanges with Blade had the same kind of resonance. Sometimes, he treated her like a girlfriend and other times, she was treated like a child he indulged. I get that Jac’s a new vampire. I get that she doesn’t have the fine control of herself and new powers that Blade does. However, she’s live an entire life before being regenerated; she’s in no way a child.

I like the hope that Jac won’t turn into Lark. But, overall, this comic didn’t feel cohesive.

This is the first issue to feature a character from the Captain Britain and MI: 13 series that was so undeservedly short lived. This was probably the best series to spin out of the Secret Invasion story arc, and I had very much enjoyed its beginnings. However, when Paul Cornell was forced to tie up the story in the last few issues, they really left me more confused than satisfied.

With the Spitfire one-shot, I was really hoping for a decent comic that would remind of why I liked the series so much in the first place.

It seems that Pete Wisdom and MI-13 are still doing their thing in the UK. Early in the issue, Wisdom and Faiza make a brief appearance before Spitfire and Blade go off on their own. Pete even says that the Braddocks are probably off “snogging,” which really creeped me out until I realized that he’s probably talking about Meggan.

There are many things I liked about this comic. The characterizations of Spitfire and Blade are great. Spitfire is actually the focus of the story, and although Blade is present in the entire issue, it’s still obvious that he’s only a supporting character. There was just enough MI: 13 to work as a good throwback to the series. The plot, while not mindblowing, was interesting.

However, I just didn’t like this comic. It just didn’t flow. It’s not that the dialogue was bad, and it’s not that the art was horrible, but I kept feeling like I couldn’t get into the pacing of the story. And really, I’m not 100% sure why. It’s not that any one thing was clearly at fault, it’s just that none of it really fit together well enough to make a cohesive whole.