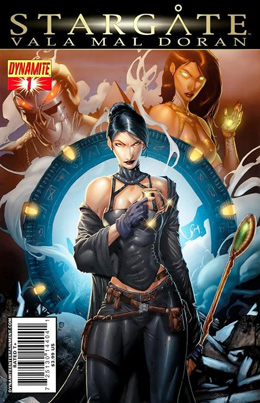 Jerwa’s plot wanted to be clever, and at points, there were things I didn’t see coming. It was all very Stargate: SG-1. And perhaps that was the exact problem. This was very much like the episode with the Lucian Alliance. There was a long trail of twists and turns, and as in her typical pre-SG-1 days, Vala betrayed those who were “helping” her and got SG-1 into trouble.

The only twist I did not see coming was that Vala was initially trying to do good by stopping the plant. I was still a little confused why she was hired to start with; as it was hidden in the middle of the jail, the plant seemed to be pretty protected without the ability to turn everyone into its slaves.

I do think Jerwa relied too much on the “Daniel loves Vala and thinks she worthwhile so he’s going to keep telling that to everyone” shtick. While I think it’s perfectly Stargate canon to do so, it’s one of my personal pet peeves from the show.

But one thing I loved and appreciated about the entire comic was Vala saving herself. Even as Cam and Teal’c try to help her at the end, only Vala makes her plan work and kills the assassin and evil plant. I approve.

This comic did make me want to rewatch some of my favorite scenes with Vala, and those episodes where she stood out and had fun. I’m glad that I picked up this comic book as my issues with Stargate (particularly it’s writing staff and how Atlantis was canceled) are plenty, but Jerwa reminded me of what I liked about the universe, particularly one of my all-time favorite characters Val Mal Doran.