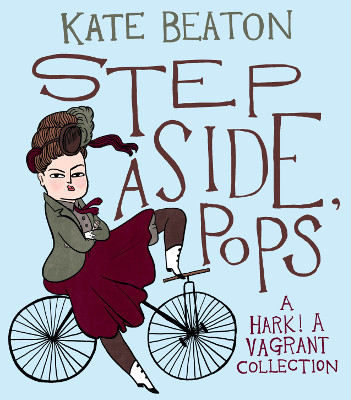 Step Aside Pops: A Hark! A Vagrant Collection by Kate Beaton

If you want joy in your life, pick up a comic by Kate Beaton. If you want to laugh again, despite the world being a dumpster fire, this will do it. If you want some great jokes about history, Brontë characters, and classical music composers, look no further.

Beaton’s comics are serialized as if they’re in a newspaper or magazine. Her black and white line style is fun and gives light to the characters’ movements and facial features. They perfectly add to the humor.

The Liszt vs Chopin friendship jokes and the Nancy Drew covers brought me back to my own childhood with piano lessons and mystery books. You always figured those composers had some rock star egos and beefs back in the day. And Nancy, seriously, what were some of those covers? I often wondered that as a girl.

Pride and Prejudice characters against Wuthering Heights. It can never get more funny than Cathy and Heathcliff being crazy compared to Elizabeth’s straight man and Darcy’s snobbery. Yes. I’m always down for some literature humor. Even if my boyfriend gave me side eye when I was cracking up, and he asked me more about it. “House Full of Mulders” though won it for me out of all the literature jokes.

“Strong Female Characters” and “Straw Feminists in the Closet” are hilarious, and sadly, they are needed in a time where where one is the “norm” for women action heroes in movies and the other is what happens when you get into arguments with MRAs. Or just people who read Breitbart and watch FOX “News” to see the other side. To quote Leslie Knope:

My favorite is still Beaton’s Wonder Woman. Her non-shit attitude is sometimes a refreshing take. Especially since so many people actually commissioned to write Wonder Woman cannot figure out their POV on her.

The one thing I wish this book had was supplemental materials. On Beaton’s website, she often provides more information about the historical characters, which adds flavor to what she’s writing if you aren’t already in the know. Since Beaton’s Canadian, she writes about historical Canadian politicians, and that’s where my biggest knowledge gap with her humor is. But I’m sure others will struggle with various topics.