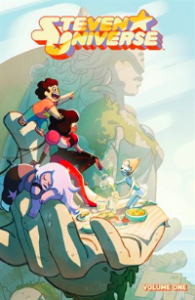 I’m a huge fan of Rebecca Sugar’s work and of Steven Universe in particular. Up until now I’ve only been familiar with the cartoon on Cartoon Network. This was my first dive into the comics. What I love about the show is its ability to introduce complex problems and situations which the characters, primarily Steven, learn to resolve through magic, or through the power of friendship. Give me a sweet soft boy surrounded by magical female-coded superheroes any day.

While none of these stories dove as deeply as any particular episode of the cartoon, each one gives the reader a little slice of a day in the life in Beach City. Whether Steven is trying to do good for the local citizens by opening a Lion-based cab company or the Crystal Gems are trying to figure out how to bake a birthday cake for Steven, each of these stories brings us closer to the core characters. We get to see them doing what they do best: caring about each other. At the end of the day, even if the cake isn’t quite perfect, or if Lion takes off unexpectedly, nobody is left with hurt feelings, and everything is back in its proper place.

One thing I would have liked to see from this issue was a real adventure with the whole team. The short scenes were fun, but they didn’t tie together at all. There was no sense of progress or cohesion to the themes. A story about baking a cake for Steven would be followed by an unrelated tale of hijinks with Lion. The larger arcs didn’t follow from one another — there was no sense of when the stories took place in relation to one another. This sort of reminds me of the early days of the cartoon, where episodes were extremely singular events and could be watched in almost random order without losing too much of the whole. But even in the cartoon, there was a sense of linear progress for Steven. He grew into his powers, grew up as a person, and grew stronger as a friend and ally in battle. At least in these issues, I didn’t get that same feeling of progress.

Unlike in the show, where actions have consequences and stories are allowed to play out across multiple episodes, this first foray into the comics stuck to the format of the early seasons of the show: quick little stories that wrap up neatly in about 10 minutes. I would have liked to see Steven draw on his powers, or see the Gems fight together against a monster and save the town. But all of that action seems to happen before or after these stories take place. We do get one panel of the Gems going to join Lion in a fight against a monster attacking the city, but the real action is off-screen.

All in all, I thought this was a great intro to the world of Steven Universe. The art was charming, the little interstitial scene-lets added flavor to the whole, and I just felt happy having read it. Well worth your time. I give it 3 out of 5 stars — it would have been nice to follow a longer story arc or get some action, but a solid entry and a lot of fun, with the characteristic heart and charm that makes Steven Universe so wonderful. Check it out!

Tawny Rose Case is a writer and voracious reader. She loves sugary sweet queer narratives and collecting enamel pins. You can follow Tawny @TawnyRoseCase on Twitter.