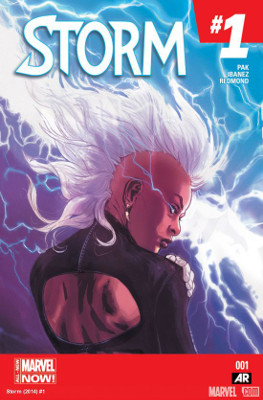 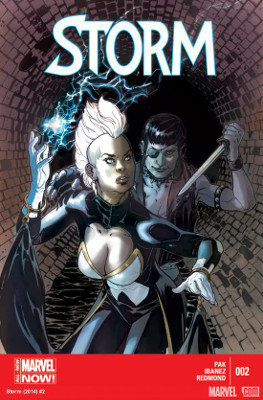 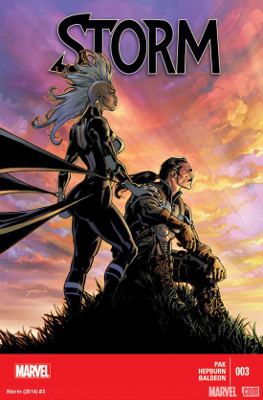 I greatly enjoyed this very much self-contained story about Ororo and the metaphor about being where you belong. Storm is a character who’s been a lot of things in the book: street kid, goddess, X-Man, queen, teacher, etc. She’s had a lot of communities so it makes sense that she’s done a lot of adjusting.

I loved seeing Storm fight back the tsunami and realize how she deals with it differently than in years past. Weather has to go somewhere, and for all Storm’s actions, there are reactions and balances that must be maintained.

Also adored seeing her helping out a community in a thoughtful manner. Of course, Ororo doesn’t hold back the punches when corruption happens. Yeah, Henry’s going to have a hard time denying that footage.

Marisol (aka Creep, aka Flourish) and her story serve as a nice contrast. No doubt, Ororo felt much the same when she first came to Xavier’s school. However, from the contrast of her molding / fungusing over the cafeteria and then growing flowers at home, Marisol seems best back in Mexico. And some day, she just might come back on her own accord.

I’m really digging how Pak writes Storm. However, I am not a big fan of Ibanez’s art, and it doesn’t seem to be improving with the second issue.

I’m kind of ambivalent about a continuation of the Storm and Wolverine romance. I mean, they’ve done it all before. Many times. And it’s went kind of no where. I guess if Storm is looking to let loose than Wolverine is probably her best bet for a hookup. (Before he died anyway.) Which is relatively safe all things considering.

It’s unsurprising to see Callisto and Storm go head-to-head. If Storm is to confront her life and make some different choices, Callisto is key into a lot about her. And Callisto’s still underground and collecting a family.

This issue was pretty weak. Seemed to be more of Storm just hanging around, exploring her past a bit, but just kind of hanging.

She’s really nervous here to go back to Kenya. But once she’s there, it’s like that worry over the history disappears. I mean, if the people remember her as a goddess, it seems odd that they don’t also try to get her to use her powers again to end their drought. Yes, she’s there to help with Forge’s technology, but still.

I’ve never been a fan of Forge as a character. He’s too much of a screw loose and seems to be a relic of the post-Vietnam era comics. Plus, he has a stupid pony tail that they also don’t know what to do about. At least Storm was straight up about having a boyfriend and not even being sure if she wanted to be Forge’s friend.

Join Storm on her adventures and buy Storm Volume 1: Make it Rain