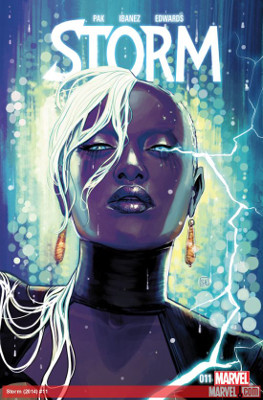 This book has been hit or miss, and issue #10 very much typifies this. The first half of this book was wonderful. The art was great, despite the three pencilers on it, and Storm settling in as a teacher at the Jean Grey school. Seeing a confident, perhaps happy woman in her career is important.

The second half with the reappearance of Kenji Uedo felt messy. The kid’s powers were messy. His reincarnation, of sorts, also messy. Not to mention, Kenji’s recruitment to the school and his eventual death, both due to Storm, took place in a different book with assumptions that we knew the narrative. I like continuity, but for a book that needs to wrap up in this issue and the next, it’s too much.

Attacks on all fronts as also not my favorite. Especially since Storm can’t be everywhere at once. I hope this is not a lesson about how women can’t have it all. That would make me very disappointed in this book.

This ending wasn’t very great, but it was overall a decent wrapup of the series and Storm’s journey as a hero.

Unsurprising that the issue ends in Kenji’s death. There really wasn’t another way to stop him, except to have Storm kill him or have him end his own existence. Not that Kenji can really die. He’ll always be able to regenerate.

It was very tidy to have everyone whose life Storm had recently been in — and those from the past. (Well, except for Yukio, who I assume was too busy running the mob, and the annoying Gambit.) The many stakes became a single, centralized stake. In the mind-realm.

One thing Pak did well with this book was show the monster side of people. Particularly women. Storm has a lot of power, which isn’t always used in smart ways by other comic creators, and unfortunately, in our society, there’s a narrative of women too powerful (hence too dangerous) to live (see: Jean Grey). Storm, on the other hand, has learned how to deal with her power and take on different roles throughout her life: some of which have been positions of power and others not so much.

Join the last part of Storm’s journey in Storm Vol. 2: Bring the Thunder.