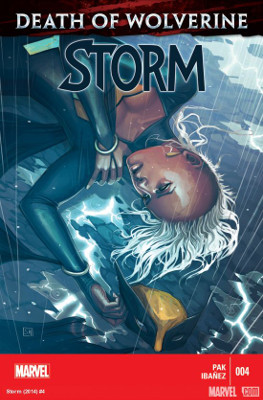 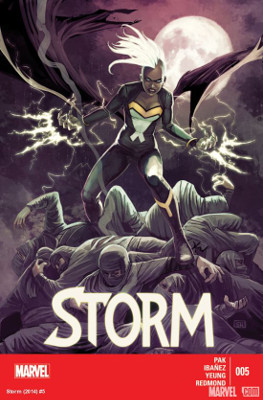 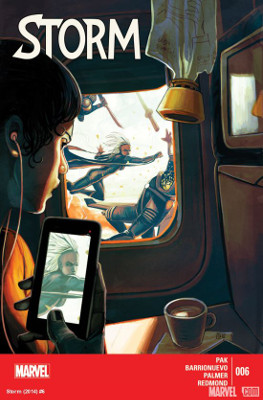 I feel like this book finally has some heart again. Yeah, it took Wolverine dying, but at least the fire and passion of Storm drives the narrative again. I love Hank’s response to the aurora effect that Storm created. He’s right to show her the good side.

Of course, Ororo is busy cleaning up Wolverine’s messes. Yukio seems very much in over her head. Also, if she’s head of some uber gang, you’d think that she’d have some other bodyguards besides just an on-call Wolverine. I know, he’s Wolverine and all, but he’s also very occupied with his twenty thousand other roles, when he was alive and all.

I’m glad that Storm was there to save Yukio from plunging to her death when she found out about Wolverine’s death. Though she’s keeping that one close to the vest.

Yeah, there’s no way Storm was going to let the champions kill each other. That’s just not in her nature. I don’t know what Yukio expected. Even wild Storm is not reckless with human life and will prevent deaths if she can.

And, of course, Storm seeks another way to end the fight without killing Gah-Ran. That’s what she does. Though I don’t think I’d want some lung fulls of sand either.

Having the other villains betting on the fight on the side was a nice touch from Pak. It kept it more grounded.

Of course, Yukio takes the opportunity to kills Kuva. I do like that it happens off panel when everyone is completely distracted by the fight between Storm and Gah-Ran. Seems fitting.

While Storm thinking about what Wolverine would do in her shoes and trying to figure out what her friend was doing for Yukio before his death seemed very much in line with someone in grief, Yukio’s assumptions about how Storm might fill in Wolverine’s shoes were a little off-base and presumptuous.

I really enjoyed just how caught off-guard Storm is by everything that happens around her in this book. She’s so distracted by her memories and thoughts and ponderings about her time with Yukio and the gangs that she doesn’t see everything unfolding and turning ugly around her like it does. It’s nice to see a mainstream superhero with this flaw.

I thought it was a great contrast to have the woman at the beginning upset that Storm was on her plane and at the end, realize that it was Storm who saved them. Compared to some of the other people on the plane, especially the marshalls.

Glad we got a magical suit explanation because sometimes that just gets confusing.

Barrionuevo’s art was okay. It’s interesting to see how he’s evolved compared to his Authority books, where the art was not my favorite. I think he’s getting better.