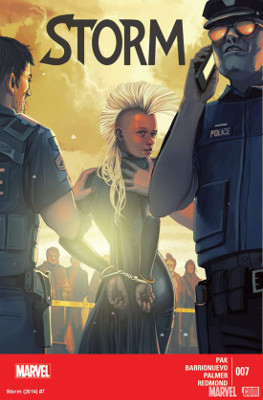 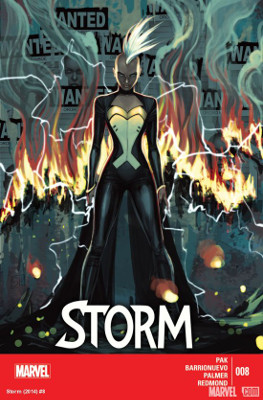 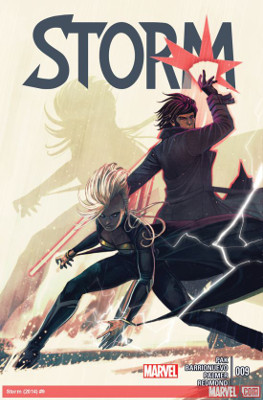 Wow, Barrionuevo has really upped his art style here. I’m really enjoying it. The characters all have their unique looks and styles.

Everyone should know not to lock up Storm. She’s not one to stay under. Especially when she’s rogue mode. Nothing’s going to keep her down.

Poor Marisol is learning the hard way what people tend to think of mutants. Of course, her own family would stand up for her…just not her fellow mutants including her teacher.

Loved seeing Storm disappear into the crowds. That was brilliant. For as much as her solo work has distanced her from the X-Men, it has made Storm more of a folk hero.

I always do love when heroes go after corrupt politicians and corporate leaders. Storm’s going to blow some shit up.

I do find it a little convenient that Storm just gets all the charges dropped against her. I mean, she still did actually kidnap the Senator.

The plot is a bit muddled in that it suddenly becomes about Davis Harmon and his corporate goals. It is nice to see the consequences of leaving a bunch of tech lying around. Not sure how seriously, even in the MCU, a CEO full of cyborg technology would be taken.

Pak has done a great job at using Storm’s powers in ways that other writers have forgotten about. The scene with the citizens of San Francisco on the bridge with a rainbow over them with all the other crazy weather seemed just perfect.

I really hate Gambit. His man bun downgrades that hate from 100% to 95% hate. But that’s about it.

Gambit seems to take a position of being so wise about himself and his situation compared to Storm. While perhaps in character, Storm is supposed to be the main character here, and his attitude undermines her agency.

Seems really odd that Storm isn’t able to use her powers in the Temple of Hermes. Sure, there’s no magic allowed, but Storm’s powers are genetic, not magic-based.

I did like the message with the mirror at the end.

Looking forward to Marisol returning and being under Storm’s mentorship. Should be a good story. And I assume there’s something wacky happening with Storm’s powers and her cellphone and how Beast keeps getting zapped.