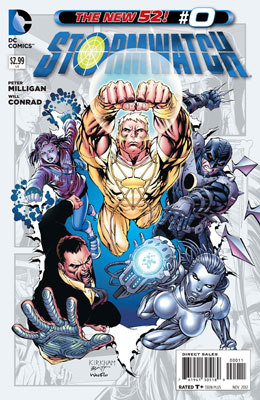 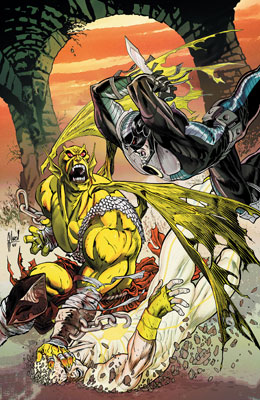 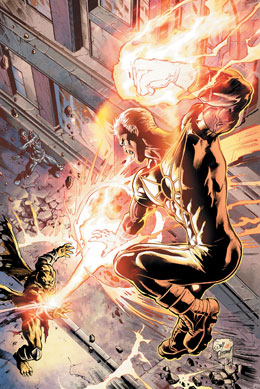 This was perhaps the least impressive #0 issue I’ve read. Perhaps because Stormwatch largely started with the team being formed. Or at least we got the backstory because many DC readers wouldn’t be familiar with the Wildstorm universe.

As much as I love the stories of the Jennys, they seemed a little light in content. Or in heart. I’m glad that Jenny Sparks is still part of the new universe. Love her very much.

I don’t trust Adam, and Jenny really shouldn’t either. I don’t understand how the superheroes are going to cause the end of the world. This is all too ominous for me. Again, giant threats looming somewhere are just so predictable. I hope that Jenny instead makes moves to learn more about her team.

Stormwatch #13 by Peter Milligan
Art: Will Conrad and Cliff Richards

Good thing I don’t believe for a second that Midnighter is dead. Maybe it’s just Etrigan playing with Apollo’s mind.

I have to say that I’m with Apollo, and I wish this was just a night out with them. Maybe a cute date.

Though I totally can see Midnighter thinking that a date involved saving the world. Or a few people. That’s just how he is. Even if he’s supposed to be blonde. (We better see that he’s dying his hair.) I would kind of love that.

I’m interested to see how Milligan will play Apollo’s powers at night. Different writers give him different levels, and considering that he’s young and still learning his powers, this could be interesting.

My only complaint is that I feel Milligan tried to dig into the deep dark recesses of making Etrigan do horrible things to the people living in the building, but he stopped short at being really horrible. But it was a little more than surface horrible.

Stormwatch #14 by Peter Milligan
Art: Will Conrad and Cliff Richards

I wasn’t a huge fan of this issue. It was fun to see Apollo explode in anger over thinking that Midnighter was dead. I’m glad that he’s not; though I kind of figured that he wasn’t. (I don’t see them killing off any of the major money-making characters and the reason why people buy these comics.)

Etrigan’s a little boring. I’m not so much into the Judo-Christian myths bleeding into my comic books. (I know, call me a hypocrite that I don’t care if there’s Greek mythology in Wonder Woman comics.) It’s just that God vs Satan is so boring; and Etrigan as a rebel against Satan’s forces just so he can have someone to punish.

The fight itself was blah. And I’m not a fan of the Engineer punishing them — and making a rule to be a band-aid on her own heart — about no fraternization without bringing in the Shadow Lords to punish Midnighter and Apollo.

Ugh, the Shadow Lords are so boring.