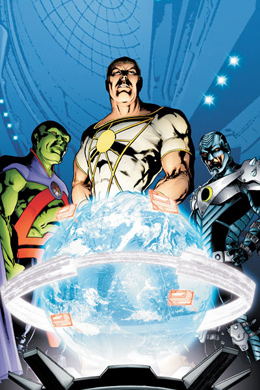 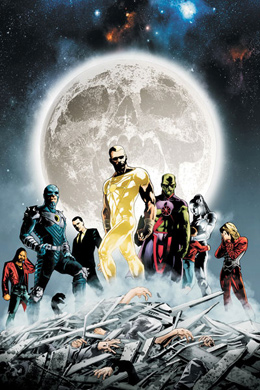 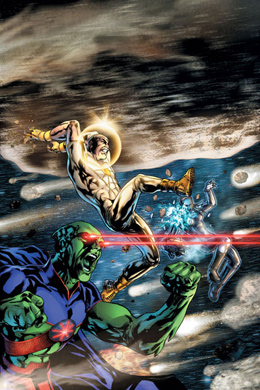 So the other reviews I read about this issue were really in two camps: people who’d never read any Wildstorm before and thought it was a great intro to the characters and those (like myself) who’ve read a bunch of Wildstorm and felt there was too much telling about the characters and their powers compared to showing. I’d much rather see Jack interact with a city than be told that’s what he does.

Also, where the hell is Swift? And I’m disappointed that this reboot is erasing Apollo and Midnighter being Jenny’s dads. Boo.

That said, I read through this comic being like “yes…and” and then when it got to the end, my fangirl shipper heart exploded with glee. So there you have it. (Though the explanation for Midnighter’s powers is going to be very interesting considering the entire story between Apollo and Midnighter is that they were created in a lab, and while Apollo’s Superman-like powers can easily be meta, Midnighter’s aren’t so much.)

I’ll be watching you, Cornell. (No, I am still not happy about those stupid season three Doctor Who episodes you wrote and what you did to Martha. The Doctor may be a jerk, but I don’t think he’d stick Martha in a time, possibly permanently, where black women were only servants.)

I think it’s interesting that Barrionuevo was added on as an artist so early on since he was working on the Authority title before Wildstorm was absorbed into DC. Especially interesting if all the characters are supposed to be getting updated looks. (Can we please have Midnighter go back to his old uniform? Please? Or just take the incredibly stupid looking spike from his chin? Also he better be a blonde when he takes off his cowl, just saying.)

I don’t now how I feel about Adam One. I don’t know anything about him. But I also think he’s too powerful for this new universe, too powerful for the DC re-imagined place. I’m not too impressed with making him loopy and uncaring. Especially when it’s Angie and Jenny yelling at him and him dismissing them as nothing because he’s seen so much. This disinterest seems like a new type of bad leader for Stormwatch.

The moon attacking the earth is a ridiculous plot, but it’s very Stormwatch. Very Wildstorm. I’m interested to see how this all unfolds and works within the new DCU.

This book continues to be a mediocre book because I think we haven’t gotten to the heart of who the characters are. Wildstorm titles are always better when they have time to tell the smaller stories, not just the huge save-the-world type of narratives. And, of course, when you get a bunch of characters with this extreme level of superpowers, it’s really tempting to tell stories like this.

When Midnighter calls for a retreat? Everyone should leave. Though I don’t know how the monster thing managed to swallow Jenny. It is Jenny, after all. Or really even Adam if he’s supposed to be so powerful.

As a character moment, I did love Apollo saying that he was only working for them to save the earth. Because he loves the earth. And I loved him pushing his powers to a place that he’d never done before and reporting on what he was feeling.

The twist in the personification of the cities was interesting for Jack’s powers. I don’t think I’ve seen people do that before. I like the new angle. Though really, Gotham was so horribly stereotypical.

I’m happy that there’s someone to change the media on the team. Because it would be awfully hard to have Stormwatch in the DCU without someone like that.