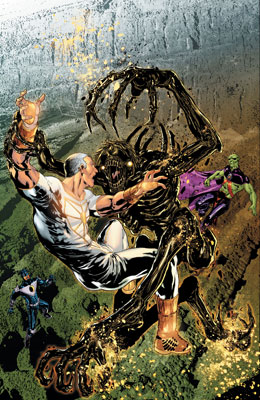 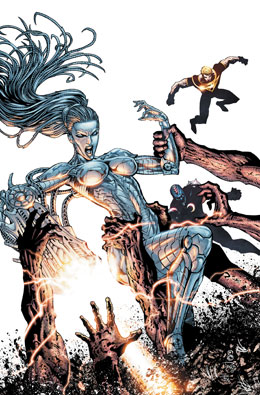 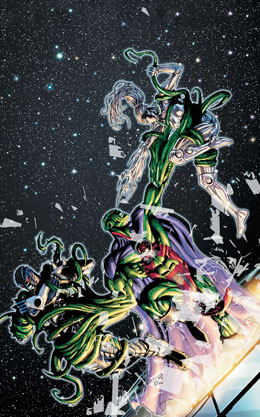 Okay, I’m still not a big fan of Calero’s art. I do think that somewhere Calero’s getting better art direction as it seemed a bit more cleaned up than his previous issue. But I am so far really pleased with Milligan on writing.

The beginning with them tailing the different main DCU superheros was pretty hilarious. Especially being on a mission to find Superman’s secret identity.

I loved Apollo being upset about Stormwatch having to be a secret organization and how that tied back to him as a gay man. I also appreciated it as a throwback to Wildstorm fans in that the Authority was Earth’s government at one point, and they were in no way secretive like Stormwatch. I also like it in the context that they may break off and do their own thing without this Shadow Cabinet. A Shadow Cabinet that seems to be jerks.

It seems to me like Milligan has lightened the tension between Jenny and Midnighter a bit. She’s still not happy with him, but it’s better than before.

I’m still not sure how I feel about this plot with Harry and Emma. (Yay, Milligan gave the Projectionist a real name!) I feel like we almost need the “I am a villain and let me tell you all my secret plans” exposition. Though this is very Stormwatch to have all the evil come from inside (or formerly inside) your team.

So what’s up with The Engineer getting sexually assaulted on the cover? Or looking like that’s what those hands are going to do.

Okay, anytime anyone says “Manhunter,” I totally expect Kate Spencer to show up and kick some ass. Because that’s what she does.

The art with the Neanderthals was pretty horrible. I feel like someone needed a lesson in how Neanderthals were actually different from homo sapiens. But isn’t it nice that we can now fight them knowing that modern humans weren’t descendents of them?

Poor Angie. She’s not only sad about Harry on a personal level, but now the Neanderthals messed with her and are trying to kill her humanity. Interesting showing how she got her powers, instead of having her be a type of spirit. Which means we’re probably not getting a Doctor or another type of spirit characters besides Jenny, Jack, and Adam. But at the same time, there was an Engineer beforehand. Confusing. I have a feeling this is one of those subjects that they debate at writers’ meetups.

This issue almost got 4 stars, but the art. The art is just so bad.

Stormwatch #12 by Peter Milligan
Art: Will Conrad and Julio Ferreira

I think this issue’s mostly filler. And it could’ve been done in a more fun way.

I love Apollo and Midnighter and their flirting. It makes me so happy. And that Apollo called him out on that ugly chin spike. Yes, it’s so horrible. Practical, but ugly. (And since other superhero costumes are far from practical, I vote to remove it.) Though I do appreciate that it now has story behind it.

I guess that they decided that people reading Stormwatch don’t need Martian Manhunter as their guide into the book? Seems that Martian Manhunter would’ve stayed aboard until they had hunted down Harry and Emma.

I do like that Harry made all those busts just as a distraction. And that Jenny put up the biggest fight.

Decide about the chin spike yourself, buy Stormwatch Vol. 2: Enemies of Earth