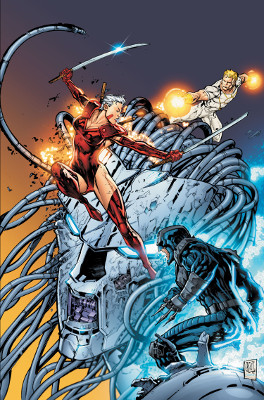 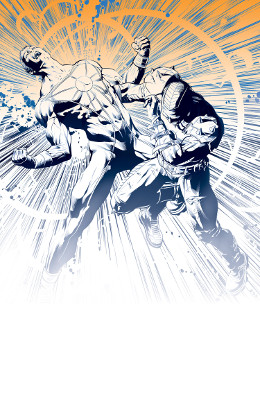 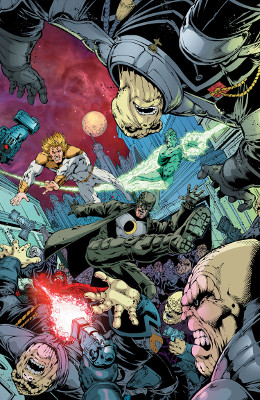 I don’t even care that Midnighter and Apollo kissed; I’m just pissed as heck that they killed the Engineer like it was nothing. Yeah, I know, this is comic books, and she’ll probably rise from the dead pretty soon because all characters come back. Except Uncle Ben, Gwen Stacey, and Bucky. Except when they do too.

Zealot was a little too deus ex machina here in that she came in just to kick ass. Or perhaps launch her own series.

I wasn’t a fan of Apollo’s jealousies. Like I get that they’re young and immature, but seriously, let’s be adults about their sexuality. Also, Midnighter could’ve been bisexual, but everyone was only assuming that sexuality is a binary opposition, not a spectrum.

I guess we’ll see what the new creative team does.

Once again, if you don’t like the direction that Stormwatch is going, all you have to do is wait like 10 issues before someone pushes reset on the entire universe. No biggie. Oh, and hey, it’s Starlin, who wrote the super early issues and did a terrible job. Yeah, Stormwatch didn’t even get popular and famous (enough for DC to even be interested in purchasing it) until Ellis came aboard.

So Starlin’s moving the universe all back into his comfort zone. Back when Apollo had horrible hair and the other folks are right in line with his comfort. He never has a new idea of his own whatsoever.

Oh, and look, he’s getting the stupidest character ever — Lobo — to join the crew. Wow, I thought this book was shit several issues ago, but this is the worst.

Holy shit, this book actually got worse. It basically has no plot, no story layers, and is the same recycled garbage done at Wildstorm before Alan Moore and Warren Ellis were brought in to lay down some real storytelling.

Like I can’t believe anyone would put their name on this garbage? They can’t even keep Apollo’s haircut, like it’s that ’90s.

Also no one cares about Lobo and anything he’s done or been through. He’ll never be redeemed because he’s a shit character that any decent creator would never put in their story.

I’m glad that we’re not learning a single thing about the Stormwatch team, except that Jenny is apparently an idiot in need of a bodyguard. Because she’s a little blonde girl. Nice whitewashing there, guys.

Figure out what you think of the new 52 and buy Stormwatch Vol. 3: Betrayal