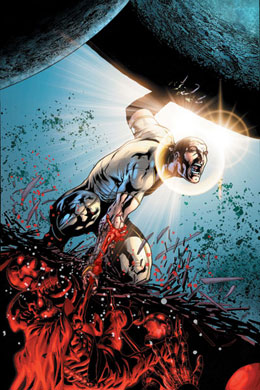 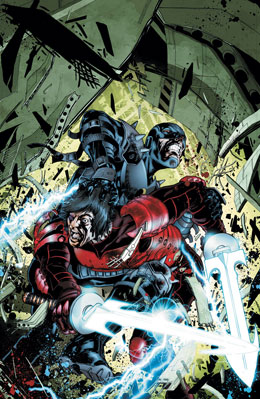 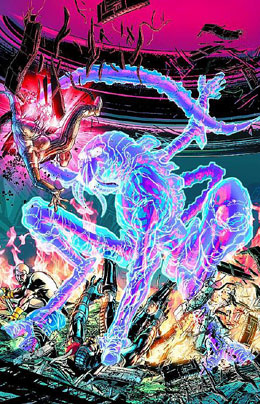 Can this comic book be completely about Apollo and Midnighter flirting with each other? (Well, Apollo really hasn’t returned Midnighter’s flirting yet. But he will soon!) Then I would be completely entertained. I also loved the ending scene where Midnighter was kneeling with his hand on Jenny’s back. I hope Cornell builds on this family vibe between them.

Giant monsters from space are just a little too much. I’m hoping to see some other heroes pop up in this book. The Projectionist is correct in that she can only control the media so much.

I find it interesting that Jenny doesn’t understand her powers at all. Does this mean we’re going to visit Jenny-land so she can meet all the Jennys before her?

I also loved Angie taking over as Adam’s such a bad leader. WTF, Stormwatch Shadow Cabinet. Though not caring if Adam dies. But what’s the point of such an all-powerful character if they’re just going to kill him off before the first arc is really finished?

So Adam’s killed and promoted? What was the point of that? I hope there’s real reason to waste time on him that’s coming later, Cornell.

I wish this art was better. I wish that with Wildstorm being absorbed into the DCU that they would be more experimental with it instead of just regurgitating artists that kind of draw like Jim Lee. It’s 2012, not 1991.

Midnighter flirting with a shirtless and shy Apollo was adorable. There could be more of that.

Harry freaking out and destroying the ship seems a little melodramatic. I know the Engineer’s not hooked in, but traditionally, the Carrier has had its own personality and control. It seems to be that it wouldn’t let itself be destroyed.

First, let’s talk about this horribly ugly cover. Why would anyone buy this based on the cover? Seriously, what is going on here? Talk about a mess straight out of the ’90s. Jim Lee, I kind of hate you.

I don’t believe that Midnighter’s head wouldn’t have imploded. Yeah, you need oxygen, but you just can’t hold your breath in space. It doesn’t work like that. Even if Apollo saving Midnighter was super sweet.

The Daemonites are still stupid. I can’t believe that they’re bringing this plot over from Wildstorm. Yes, let’s reset the universe so we can use the same plots over! Because that’s what a reboot is all about. I miss the Carrier being alive just because it is. But I’m glad that Jack is still his arrogant self. Though Angie assuming control with motion to put Jenny in charge when she grows up is the best.

I could so care less about Martian Manhunter and his divide loyalties.