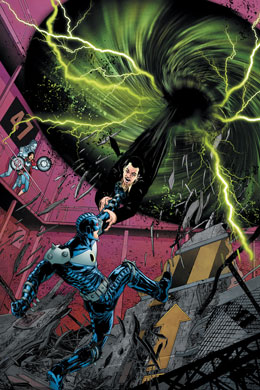 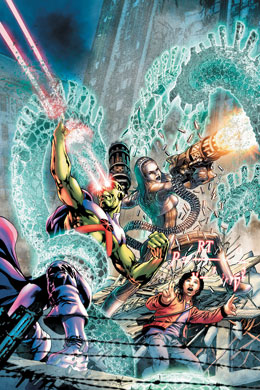 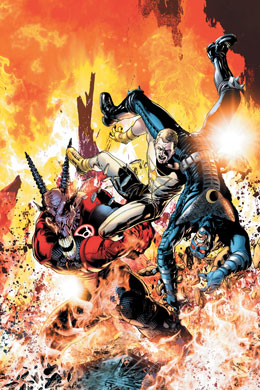 Okay, they can’t even keep a writer on for more than six issues. This is a problem. See, when you fold one company into another and two universes together, you have to actually want to sell books. It’s much easier to sell books if you put good stories and art in it. Consistent writers and artists to establish the new characters in a new book. I just don’t get this from a publisher’s point-of-view.

Martian Manhunter being all mansplain-y to Jenny about math was so annoying. Seriously. Even Jenny’s puppy fixation doesn’t make up for it. Shouldn’t the Engineer be translating math for Jenny?

Speaking of the Engineer, the Carrier’s brain is called Charlie? I thought the Carrier has been female-identified.

Is Calero going to draw Jack as handsome or ugly? Young or old?

And I haven’t even gotten to the part where I tell you how much I don’t care about this plot.

This actually got better. It got better because Jenkins brought in the story. It became a smaller story with real things at stake for Midnighter, Apollo, and Jenny. Even if I highly disagree that Midnighter would leave Jenny behind to die. I mean, Jenkins didn’t even call into play Midnighter seeing something with his powers. As someone who loves the Authority comics, I have such an issue with Midnighter doing that to the character who’s his daughter. Reboot my ass.

Okay, I’m not understanding this Charlie thing. Now I’m thinking it was the outcome of the first issues and isn’t really the Carrier’s personality. Whatever.

Maybe we’ll get some smaller stories and investment of characters. Maybe as Milligan takes over writing duties, things will get better. They can only get better, right?

Did this comic book just become good? I approve. I so approve. Even the art is better. (If the covers still remain in the ’90s.)

That said, it would’ve been good to name Skallox in this comic book. (Which I had to look up as I only have passing knowledge of the Lanterns.)

But I loved this look inside Midnighter’s head. That he’s worried about going too far, and that he thinks he’ll be put down by the Shadow Cabinet if he does go too far. (But it seems like that would be the problem of sending a bigger power after him and then when that person gets out of control…)

I kind of love that they have a holodeck.

It seems like Apollo and Midnighter are dating… I would greatly appreciate some clarification or first date or something like that. We all know they’re going to get together, but that doesn’t mean you can’t show it.

I also want to know more Angie in this universe. Especially if she’s team leader.