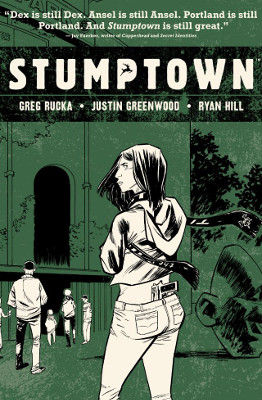 I really loved the other two volumes of Stumptown, and this one let me down. The story wasn’t as intriguing as the others. I also didn’t enjoy Greenwood’s art as much as Southworth’s. Southworth’s art brought the city of Portland to life as another character, but Greenwood’s didn’t have the familiarity with the city. Instead the intensity of the Timbers’ game filled in.

I’m not a soccer fan, and there were a ton of references which I didn’t get. I got a couple because I’ve been to some Sounders’ games and work with some soccer fanatics. It’s hard to care about sports when you aren’t into them. I felt there was some assumptions about the audience actually understanding more.

The mystery of who beat up Mercury felt light. Or perhaps too tied to the other plot threads. I couldn’t tell if it was the actual mystery here or that I’d forgotten a lot about the other volumes, which I’d read a while ago. There wasn’t enough issues for me settle back into the book.

I liked CK keeping Dex in check as she spiraled out of control. It was good to learn some background about her military service and why she quit. Also you could see the stress of her trying to live her life, put her business together, and take care of Ansel.

Dex hooking up with the Timbers’ Jimmy Burke felt a little in Mary Sue category. Though not off compared to who she hooks up with in the other volumes.

I did love the ending, in that the police figured out the mystery before / at the same time as Dex and CK. I also liked CK’s friendship with Dex and where they left it. I wonder if, in future volumes, we’ll see Mercury again or if the coma is his ending.