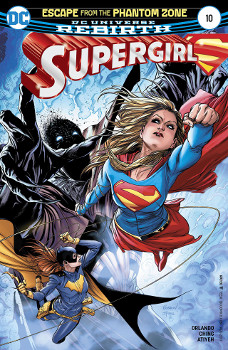 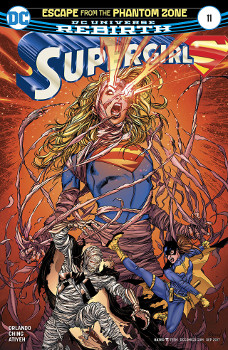 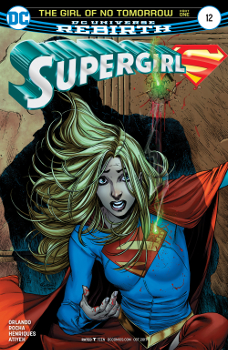 The Phantom Zone makes me groan. Crossovers make me groan. This issue had a lot of elements that I’m not fond of.

Ching’s art continues to be awesome though. I love his Supergirl design. She’s so determined. I also love the psychic dragon so much. It was just gorgeous.

I loved how Babs talked about being in college, and then both Ben and Kara piped up that they were still in high school. I guess the Phantom Zone doesn’t care about your age.

Then Dr. Xa-Du got all supervillainy, and I felt like I didn’t follow much of it. There’s lots of waggle about Kryptonian houses and old grudges. I’m glad Lar-On was in previously issues because at least I had some reference there.

A few cute moments and some art. That’s it for me on this issue. (I see the trade is collecting the crossover Batgirl Annual #1.)

I’m so very glad that they are back from the Phantom Zone. It doesn’t surprise me that Dr. Xa-Du didn’t get his way and that Psi now rules it for good.

There could be some interesting commentary on reforming villains, but it falls a little short. Batgirl sees a lot of villains who never reform in Gotham City, and Supergirl typically believes in the good in people. Is Batman a broken windows policing policy in action? Or is that Spider-Man?

Anyway, Supergirl wins through some strong arming and some friendships. She believes in people. And now she has a friend in Batgirl.

Of course, who knows what the heck’s going on with Cat Grant?

Wow, this issue was a mess. I mean, I figured that wasn’t actually Cat Grant who shot Supergirl. But wow, a mess.

On the fourth page, after Supergirl’s been shot and she’s just regained her flying balance, her body is twisted in an unbelievable manner. “Classic” dude artist who can’t figure out that women do have organs in their bodies. Her limbs make no sense in their size from that perspective. I get that obtaining a photo reference of someone falling from a great height is not an easy challenge, but damn, there has to be something out there to make this better.

Unfortunately, Rocha’s art doesn’t improve much from there. His pencils drag down the quality of this issue. In general, I’m not a fan of his art at all. But when he draws women, they are even worse. Chase shows off some cleavage. Enchantress has rib-like abs in her belly shirt. Selena’s dress must be taped (or magicked) on. Kara opens her o-mouth when the floor of her school collapses and she falls in.

The plot itself also lacks. Instead of having Supergirl figure out who she is, the Fatal Five show up and demand a fight. They cause disruptions of Kara’s powers through magic. And she doesn’t trust Eliza and Jeremiah enough to talk to them about it or report to the DEO. This cannot go wrong.

I get we’re supposed to see her as a teenager who cannot make logical choices. However, perhaps we could have some issues with her bonding with her adoptive parents. The moment, in the medical bay, where Kara talks to her father was the only one showing any potential for this series.