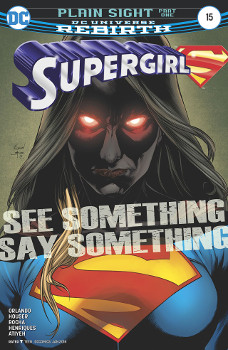 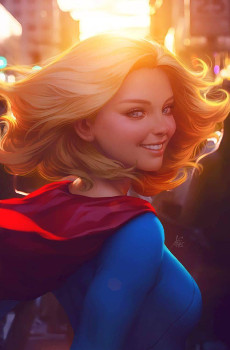 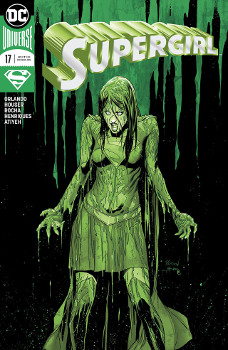 So Kara suddenly likes Ben as more than her friend? I’m not sure I’m buying this plot. Though I will take Belinda’s Wonder Woman tunic dress. Yes, please, I’d like to wear that, DC.

I’d imagine it’s pretty hard for Kara to step away. Especially when she can still hear the cries for help from people who need her.

I am not a fan of Rocha’s art. In the opening scene where Kara rescues the guy and his dog, her torso proportions are just wrong. Either she has some extra bones or not quite enough. And when Agent Ocampo walks the hallway, and Kara and Ben take note, it’s one of those butt with head turned shots. Ewwww.

What I don’t understand is how the DEO hasn’t figured out that Kara is Supergirl. The Danvers were their agents for a long time, and sure Chase made a special file, but it wouldn’t take much digging to discover that until recently they didn’t have an adopted daughter.

Also, way to drag brand marketing there. Jeremiah would actually have to have some knowledge about and experience in marketing in order to get that gig. They’d notice.

Unsurprisingly Bones dragged out Dr. Veritas and now wants to use her projects for the gray areas he specializes in. His old costume was ridiculous.

First, in the fight with Sharon Vance, Rocha places Sharon Vance in a mid-air, rage face Boobs-and-Butt Pose. I know when I’m fighting with my enemies — or the people I think are my enemies as I’ve been brainwashed by Director Bones — I always pose like I have a broken back as I want them to want to fuck me.

But what I really want is to talk about Deceilia’s costume and styling. I’ve seen a lot of terrible costumes in the years I’ve been reading comic books, especially superhero comic books. This one is puzzling in so many ways. Especially since Deceilia was created in the year of our lord 2018, specially to appear in this Supergirl book. It isn’t even because Rocha didn’t want to create a new costume and wasn’t interested in updating styling.

I’m just going from top-down since I don’t know where to start. Deceilia’s hair is a thick bread. The length varies from panel to panel. Sometimes, it appears mid-back in length, other times down to her boots. It also seems to have a life of its own like she’s Medusa or something.

Next up, the mask. Masks are meant to hide your face; this mask covers up nothing! Except her ears, making it harder for Deceilia to hear.

She’s been in Director Bones’ containment tubes, but she’s in a full-face of makeup. Overly done mascara and eye liner with black lipstick like she’s heading to work at the local Hot Topic.

I’m not sure why Deceilia’s neck muscles are that way, but they give an overly masculine vibe in direct contrast with the feminine details of her costume. Making villainous women butch or man-like is a terrible, and ultimately transphobic, trope.

Next is the horrific white jacket with cut-outs and those pink sleeves. The pink sleeves are directly off the infamous puffy shirt from Seinfeld, only pink (feminine!) instead of white. They are pink just because? Then the rest of white jacket is perfectly cutout to go around Deceilia’s boobs, but stick to the middle of the lower rib cage. And if missing fabric around the boobs isn’t enough, there’s a perfectly circular shoulder cutout. This would all have to be tapped or glued to her body.

Then there’s the gloves and boots, which I’m talking about together. They both are white and both have a little bit of black, in no discernible shape to match the catsuit. They are probably the least offensive part of this costume.

The black catsuit, of course, appears to be painted on. It’s strapless, and magically holds itself up. Of course, it dives between the cleavage in a sexy way. The boob cups are too small to actually hold in Deceilia’s breasts, and Rocha has no idea how big the average grown woman’s areolas are. They’d definitely be showing in this costume.

The catsuit appears to have some useless contouring around the waist, like a belt. But you know, women never need actual belts or pockets, that’s just silly. Just the extra body hugging!

I guess I could talk about how the story’s okay. But that Kara and Belinda need to hang out more. Instead, I’ve spent most of my time thinking about how Deceilia’s costume and styling is possibly the worst I’ve seen superhero art, especially recent years.

Then I got further derailed by looking up other examples of Rocha’s art. Don’t even get me started on how he draws Dex-Starr over in the Lantern books. Can’t draw cats, you will never win me over!

Glad we got the clarification that Deceilia is a freak who looks weird, and that is the choices Rocha made to “look weird.” Basically, he made her look unattractive by the Western male gaze. Great! This is a great message to put in a comic book about a teenage girl!

I’m not so such what to think about Ben, Belinda, and Kara’s teenage awkward maybe love triangle. Like I think it’s just a misunderstanding, and I’m going to trust Houser and Orlando to make it that way and not pit two teenage girls, who are friends, against each other over a boy.

Ferreira’s work to give the kids at the dance different outfits, and even stylist ones was really nice. I love putting Ben in this type of red suit. He looks great in it. It was such a contrast to the issue I read after this — She-Hulk #163 — where they are also at a high school dance and the outfits are bland formal wear without styles.

I did love the conversation between Eliza and Kara in front of the fire. It felt very mother-daughter, and it’s nice to see their relationship, not just have Kara say her feelings for Eliza are that way.